Gharat, Dhumal shine as Tata SC defends a low score of 94 to sneak a two-run win in RCF T20 final. 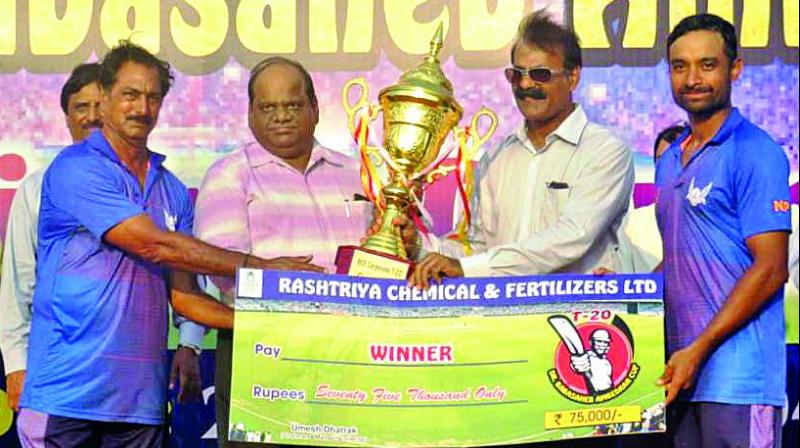 Tata Sports Club team members are all smiles as they pose with the Dr. Babasaheb Ambedkar Cup during the prize distribution function. Tata SC snatched a narrow 2-run win against Future Group in a tense final.

After captain Akshay Darekar decided to field first the Future Group bowlers got regular wickets as Tata’s collapsed to 47 for 8 wickets in 11 overs. But a face-saving effort from number nine batsman Vishal Dabholkar who scored a 34-ball unbeaten 27 runs studded with three boundaries helped Tata’s to score 94 before getting all out in 19.1 overs. Dabholkar and Siddharth Raut (15 runs) put together a 33-run ninth wicket partnership to provide some respectability to their innings.

Defending a low total, the Tata SC spinners Brijesh Gharat (3/16), Aditya Dhumal (3/19) and Chirag Khurana (2/6) rose to the challenge and tormented the Future Group batsmen and bundled them out for a paltry 92 runs in 19.4 overs to emerge champions. Raunaq Sharma (27 runs) and Shashikant Kadam (16 runs) were the only batsmen to get into double figures for Future Group as rest of the batsmen cut a sorry figure.

Gharat was later named  as ‘Man of the match’ and he also won the Best Bowler award. Shashikant Kadam (Future Group) was declared as the Player of the tournament.