Prithvi, who led India to U-19 World Cup triumph earlier this year, enhanced his growing reputation by raising his fifty in just 25 balls. 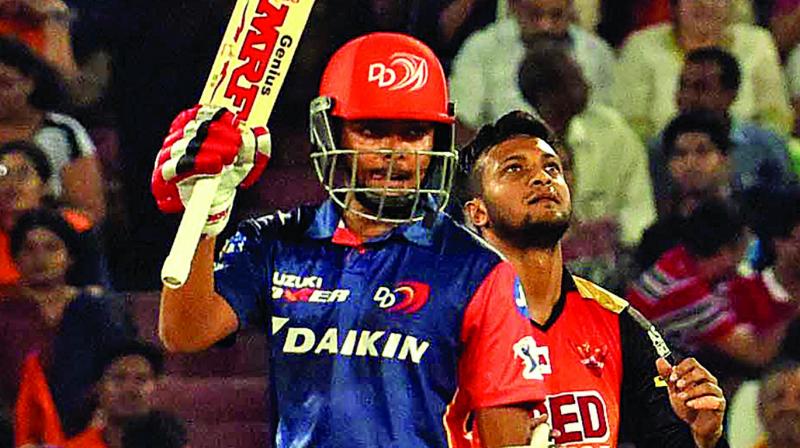 Hyderabad: Young opener Prithvi Shaw slammed his second half-century (65 off 36 balls) of this IPL season and skipper Shreyas Iyer (44 off 36 balls) once again chipped in with some valuable contribution as Delhi Dardevils made 163/5 in 20 overs against Sunrisers Hyderabad at the Rajiv Gandhi International Stadium here on Saturday.

Prithvi, who led India to U-19 World Cup triumph earlier this year, enhanced his growing reputation by raising his fifty in just 25 balls.

His 86-run partnership with Shreyas for the second wicket helped Delhi lay a strong foundation, but the visitors could only add 68 runs in the second half of the innings following a middle-order collapse.

Electing to bat, Delhi lost Glenn Maxwell (2) early. The Aussie, who was promoted up the order, found himself well short of the crease when Prithvi's straight drive crashed into the stumps at non-striker's end after it ricocheted off bowler Sandeep Sharma.

Prithvi, however, kept the scoreboard ticking by finding gaps at ease. In the sixth over, he dispatched Siddarth Kaul for a six and hit three consecutive fours as the visitors ended the powerplay on 60/1.

Shreyas too joined the party later by clubbing a six and a four off Shakib al Hasan in the ninth over. It was leg-spinner Rashid Khan who severed the partnership by dismissing Prithvi. His sweep found an edge only to land safely in the hands of Siddarth at short third-man.

Hyderabad bowlers then tightened the screws on Daredevils. From 95/1 in 10 overs, Delhi managed to add just 30 more in next five. Next to go was Shreyas for 44 as his lofted shot found Shikhar Dhawan at deep mid-wicket as Siddarth, who was having a rough day with the ball, finally tasted some success.

In the 17th over, Rashid conceded just two runs and removed Naman Ojha as the miscommunication between him and Pant left the former stranded in the middle and Rashid was quick to throw it to the wicketkeeper Wriddhiman Saha who did the rest. Later, he trapped Pant right in front of the stumps to finish with the figures of 4-0-23-2.