The wicket-keeper batsman said he always prepared earnestly before each and every game thinking that he would be part of the playing XI. 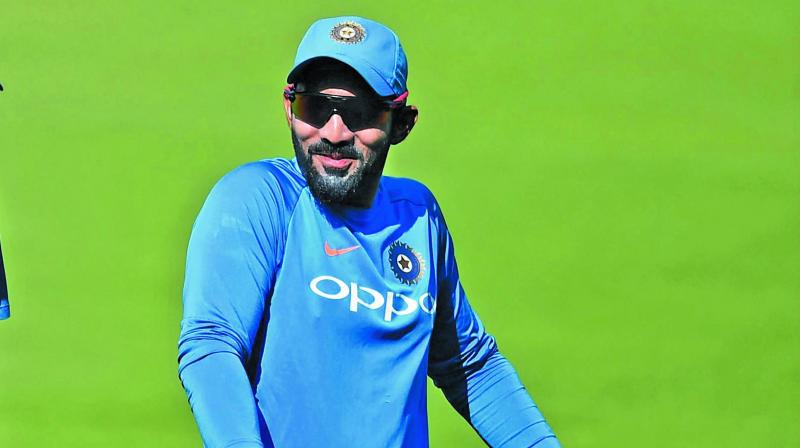 LEEDS: Having made his international debut 15 years back, Dinesh Karthik had to wait long for his World Cup debut. Karthik heaved a sigh of relief when it finally happened, against Bangladesh at Edgbaston. “I’ve been around for 15 years. So to play that game, I was delighted. I’ve been to the World Cup in 2007, which actually didn’t go as well as we had planned. And for me to come here and sit out the initial bit and then get a chance was something that I was really looking forward to. I think it’s a very important phase of this tournament. I’ve been waiting to get this opportunity. So the motivation is there. The hunger is there. It’s about going there and executing,” said Karthik.

The wicket-keeper batsman said he always prepared earnestly before each and every game thinking that he would be part of the playing XI. “I think every member of this 15 prepares like that. I say that because we get a handful of opportunities. We get an opportunity to hit in the practice. So, basically, we’re treated like we’re playing in the 11. So we try and prepare like we’re playing in the 11,” added Karthik.

There’s been so much talk about the muddling middle-order of Team India. Karthik who replaced Kedar Jadhav in the XI couldn’t make much impact against Bangladesh. “I think they’ve been very clear on what my role has been. When I go in at No. 7, I need to judge this — assess the situation of the game and then play accordingly. We need to cross the line when we’re batting second, then I need to pace myself accordingly. If you’re batting first, then make sure we get to the par score that’s required. They’ve made it clear that this is where I’ll be batting, and my role is to make sure, whatever the situation is, assess it and do the best that I can,” he explained.

The World Cup hasn’t witnessed many successful chases. While the scoreboard pressure in a big tournament put paid to the hopes of big chases, the wickets that slowed down the second innings didn’t help either. Karthik, however, feels India are capable of chasing down any target.

“India have been good chasers for a long time. And we have the ability to handle pressure well. While talking about others who haven’t chased well, I think the reason being they’re worried about the scoreboard pressure. I think a lot of teams have fallen prey to that as well,” he added.