Australia have the magnificent World Cup campaign so far as they won seven matches and lost only to India. 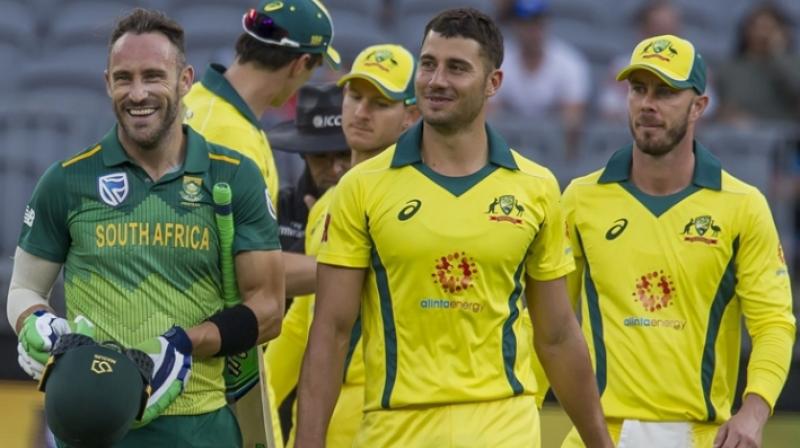 Australia are at the top of the points table with 14 points. If Aussies beat South Africa, they will seal the first spot. (Photo: AFP)

New Delhi: Australia, the number one side in the current teams' standings of the ICC Men's Cricket World Cup, would look to finish at the top when they lock horns with South Africa in their last match of the round-robin format on Saturday.

Australia have the magnificent World Cup campaign so far as they won seven matches and lost only to India. Australia are at the top of the points table with 14 points. If Aussies beat South Africa, they will seal the first spot.

South Africa, on the other hand, are out of the tournament as they won only two games out of eight.

Proteas did not get a good start as they lost their first three matches and game against the West Indies was washed out. South Africa could not recover from there and only managed to win against Afghanistan and Sri Lanka.

Here are the key players to watch out for in Australia-Sri Lanka clash:

Warner returned to the Australia team after serving a year-long ban for his involvement in a ball-tampering scandal. He was the leading run-scorer in the recently concluded Indian Premier League (IPL) with 692 runs in 12 innings. In the eight World Cup matches played so far, Warner has 512 runs under his belt, he is at the third place in the most-run scorer table. The 32-year-old is also the highest scorer in the tournament as he played a knock of 166 runs against Bangladesh.

South Africa's wicket-keeper batsman de Kock strengthens the top-order and provides a speedy start to the innings. The left-hander has the ability to adapt according to the situation. In South Africa's first World Cup match, de Kock scored a well-compiled 74-ball 68 runs, including six boundaries and two sixes in an attempt to single-handedly save the sinking Proteas ship. De Kock has scored 253 runs in eight matches.

The right-arm fast bowler possesses the skills of bowling both in-swingers and out-swingers. The 24-year old is also known for his toe-breaking yorkers in the death overs. Rabada finished at the second position in the highest wicket-takers' list in the recent edition of Indian Premier League (IPL). Rabada has so far taken eight wickets in this World Cup and the Proteas bowling heavily rely on him.

The 29-year-old left-arm pacer has been in exceptional form in the tournament. The joint highest wicket-taker with Trent Boult in the 2015 edition, Starc is the leading wicket-taker in the ongoing tournament with 24 wickets so far. Known for nailing the perfect yorker, Starc picked up four wickets each against England and Sri Lanka, respectively. He also returned with a five-wicket haul against West Indies. In fixture against England, Starc stunned Ben Stokes as he delivered a perfect and match-winning off-stump yorker. The cricket fraternity praised the delivery and even called it the ball of the tournament. Starc returned with the figure of 5-26 in the last game against New Zealand.