Mashrafe's side lost by 94 runs against Pakistan at Lord's on Friday in a disappointing conclusion to their World Cup campaign. 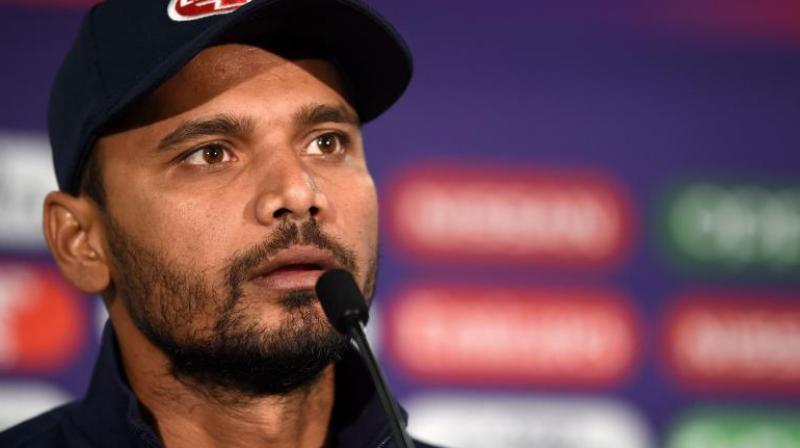 Asked how he rated Bangladesh's campaign, Mashrafe conceded they had been exposed at times in their sloppy fielding (Photo: AFP)

London: Bangladesh captain Mashrafe Mortaza admitted he needs time to decide his future amid speculation he will retire or resign following his team's World Cup exit.

Mashrafe's side lost by 94 runs against Pakistan at Lord's on Friday in a disappointing conclusion to their World Cup campaign.

Attention turned to Mashrafe's future at the post-match press conference, but the 35-year-old wasn't ready to reveal his plans.

"My future plan is obviously going home from here, and then I'll rethink," he told reporters.

Bangladesh had already been eliminated from the race to qualify for the semi-finals, but had hoped to finish the tournament on a high note.

Instead, they succumbed to a limp defeat that left them with three wins from nine matches in the tournament.

Asked how he rated Bangladesh's campaign, Mashrafe conceded they had been exposed at times in their sloppy fielding, while his bowlers found it hard to thrive in English conditions.

"I think the players tried their best. As I said, there were a few areas we could improve a lot. We knew what our weaknesses were," he said.

"If we play in Asia, I think it will be a far better bowling site than here. So we need to find our best ways to bowl them out or maybe restrict them.

"Batting hasn't been an issue before the World Cup. I think the boys are clear what they can do. Fielding, it has been concern there all of my career ... This is the part the players can change. We really need to improve fielding."

The World Cup's round-robin format -- with each of the 10 teams facing each other once before the top four move into the semi-finals -- has received mixed reviews, but Mashrafe relished the opportunity for Bangladesh to play all the top sides.

"That format I loved, because every team has been exposed to everyone else. And to be honest I think some people will not be very happy with that," he said.