The top-order batsman registered his seventh fifty-plus score in the ongoing tournament. 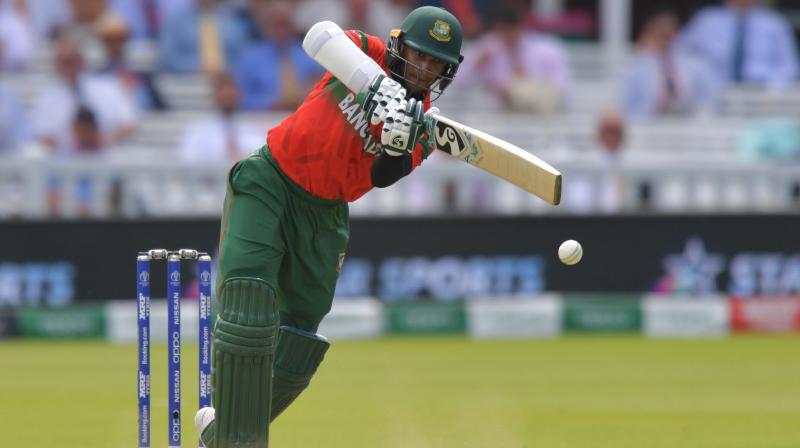 The 32-year-old is the third batsman to register more than 600 runs in the history of World Cup. (Photo: AFP)

He achieved the feat in the match between Bangladesh and Pakistan at Lord's Cricket Ground in London.

Shakib displaced India's opening batsman Rohit Sharma at the top spot. The left-handed batsman had entered the field with 542 runs to his credit and he went on to play a knock of 64 runs to take his tally up to 606 runs.

The 32-year-old is the third batsman to register more than 600 runs in the history of World Cup. Sachin Tendulkar scored 673 runs in the 2003 edition whereas Australia's Matthew Hayden registered 659 runs in the 2007 edition.

The top-order batsman registered his seventh fifty-plus score in the ongoing tournament and now holds the record for scoring the most number of fifty-plus scores in a single edition of the World Cup.

Shakib also has 11 wickets to his name and he is the only all-rounder to score more than 500 runs and take more than 10 wickets in a single edition of the tournament.

Pakistan won the match against Bangladesh by 94 runs. Opting to bat first, the Green Shirts posted a score of 315/9 in the allotted fifty overs. Imam-ul-Haq was the top-scorer for the team as he played a knock of 100 runs whereas Mustafizur Rahman scalped five wickets for Bangladesh.

Pakistan easily defended the total as Afridi took a six-wicket haul. The team, however, failed to qualify for the semis as they were unable to restrict Bangladesh to under seven runs.

Bangladesh finished the tournament at the seventh position with 7 points whereas Pakistan finished at the fifth spot with 11 points.

Sharma is at the second spot in the leading run-scorer list with 544 runs and Australian opener David Warner is at the third spot with 516 runs.