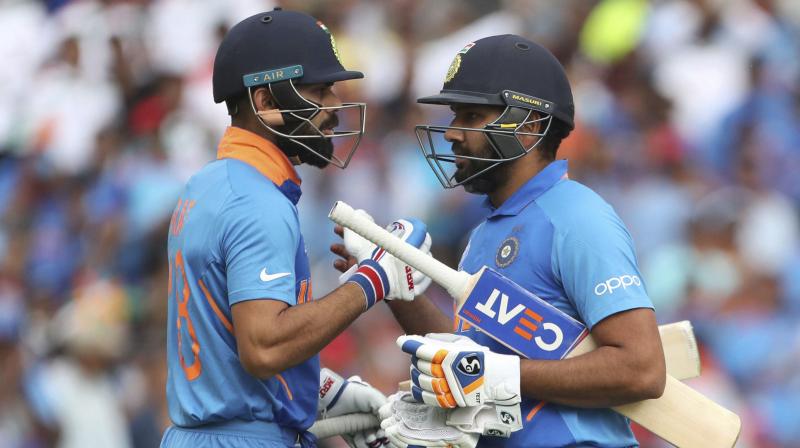 Mumbai: Rohit Sharma hit his fifth century of the World Cup as India eased past Sri Lanka by seven wickets in their final group game at Headingley on Saturday.

Sri Lanka scored 264 for seven in their 50 overs, with Angelo Mathews hitting 113 runs.

But Sharma, who made 103, and KL Rahul rarely looked troubled during the chase, putting on 189 for the first wicket as India reached their target with more than six overs to spare.

43.3: India finish their league games of ICC World Cup 2019 with a win over Sri Lanka! India defeat Sri Lanka by seven wickets. Rohit and Rahul steer India to a comfortable win over Sri Lanka. Rohit Sharma gets Man of the Match award.

41.6: Wicket! Udana traps Rishabh Pant! India lose their third wicket as Rishabh Pant departs on 4. Udana gets his first wicket of the match.

40.6: Wicket! KL Rahul's innings comes to an end as Lasith Malinga scalps his wicket with a short delivery. Rahul departs after scoring 111 runs off 118 balls.

28.6: Rohit Sharma reaches his 100! There's the record fifth century in this World Cup for the Hitman. Sharma became the 4th batsman and the 2nd Indian to score over 600 runs in a single edition of the World Cup.

16.1: Fifty for Rohit Sharma! He becomes the fourth player to score 600 runs in one edition of the World Cup.

6.5: 50 comes up for India! KL Rahul and Rohit Sharma steer India to a good start.

43.5: FOUR! and Mathews has completed a brilliant century. Despite the poor batting, in the beginning, Sri Lanka are at 226/5.

39.6: Sri Lanka reach 200 and have 10 overs and five wickets yet to spare. They have handled and stabilized the batting turmoil that the innings began with.

37.5: Wicket! Kuldeep Yadav gets his first wicket of the game. Thirimanne departs just after finishing his half century, on 53.

35.1: Thirimanne also completes his half century off 65 balls.

32.6: Mathews has completed his half century and stabilised Sri Lanka's batting. The second fifty for him at this World Cup.

11.4: Another Wicket! Hardik Pandya strikes, Avishka Fernando has been dismissed on 20.

10.4: Wicket! Jadeja strikes in his first over of the tournament! Mendis misses and gets stumped.

7.1: Wicket! Bumrah strikes again and Perera who was facing the Indian bowler for the first time has been dismissed.

3.4: Wicket! Karunaratne hits the ball and gets caught. Bumrah starts early today and is already on fire. No runs given yet and a wicket on top. Bumrah gets his 100th ODI Wicket!

Sri Lanka win the toss and elect to bat.

The match is scheduled to start at 3 pm IST on Saturday. (July 6)

The match will take place at the Headingley Cricket Ground, Leeds.

Star India has acquired the rights of telecasting the tournament, and the matches will be telecast on various Star Sports Channels.

The match can be viewed live on Hotstar as well.

India are already in the semi-finals thanks to their last win over West Indies. Ahead of their last game of the group stages, India have won all but two matches in their eight games so far, one of them being a no-result washout.

Still facing some issues in the choice of bowlers, middle-order batting and choice of playing members, India have an opportunity to iron out these issues in their otherwise stellar performance so far.

Despite the assurance, India will still look to get a win today against Sri Lanka. The win will put second-place India on top of the points table.

Sri Lanka are already out of the top four race and are currently placed sixth on the points table. The team will regardless look forward to exit the world cup with a bang in the clash, which is also their last game in the group stages.

The team, which even after good performances are lower on the table, had faced two consecutive washout games. Regardless Sri Lanka has picked up the pace and have already put behind has West Indies and South Africa.