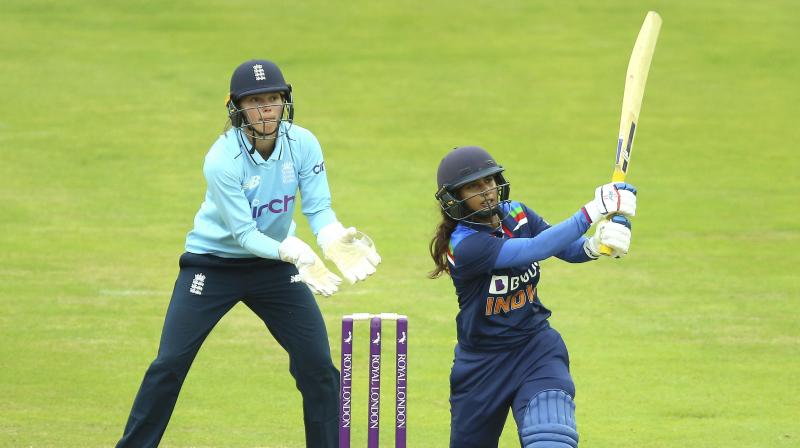 Mithali Raj hits a six during her innings in the third ODI against England. (Photo: AP)

Dubai: India skipper Mithali Raj on Tuesday reclaimed the number one spot in the women's ODI rankings after more than three years following a stellar show in the three-match series against England.

India lost the series 1-2 but the 38-year-old Raj hit a half-century in each of the contest.

She struck 72 and 59 in the first two ODIs and then guided India to a four-wicket victory in the final match of the series with an unbeaten 75, gaining four spots to reach the top of the ladder.

She last occupied the top spot in February 2018.

The first time she reached number one position was in April 2005 after scoring an unbeaten 91 against New Zealand at the World Cup in Potchefstroom and the difference of more than 16 years at No.1 is the largest for any woman batter.

England's Janette Brittin was number one for the first time in 1984 and the last time in 1995, while New Zealand's Debbie Hockley is the only other female batter to have been No.1 more than 10 years apart  first achieving the feat in 1987 and for the final time in 1997.

Big-hitting India opener Shafali Verma's scores of 44 and 19 in the last two ODIs of the series saw her gain 49 places to reach 71st position while veteran pacer Jhulan Goswami is up four places to 53rd.

In the bowlers' list, all-rounder Deepti Sharma is up one place to 12th after finishing with figures of three for 47 in the final match.

For England, opener Lauren Winfield-Hill has advanced 14 places to 41st position with scores of 42 and 36 while Sophia Dunkley has soared 80 places to 76th after scoring 73 not out and 28.

Left-arm spinner Sophie Ecclestone continues her ascent, gaining four places to reach a career-best sixth position among bowlers after returning with figures of three for 33 and two for 36.

Kate Cross' haul of five for 34 in the second match of the series has helped her reach 18th position from 25th.

Nat Sciver and Sarah Glenn have both moved up one place to reach 22nd and 43rd positions, respectively.

In the Women's T20I Player Rankings, Pakistan spinner Nida Dar, who became the first woman from her country to the milestone of a 100 T20I wickets, has gained six spots to reach 15th position after finishing with four wickets in a three-match series against the West Indies.

For the West Indies, Shamilia Cornell has moved up 14 slots to 27th place while captain Stafanie Taylor has advanced 10 places to reach 42nd position after claiming a hat-trick and finishing with four for 17 in the last match. Fatima Sana is up 85 places to 94th.

Among batters, Chedean Nation has progressed 17 places to 61st and Kycia Knight 20 places to 71st.