Shaw's ban was backdated to March 16, despite the fact he was playing for the Delhi Capitals in the Indian Premier League until May 8. 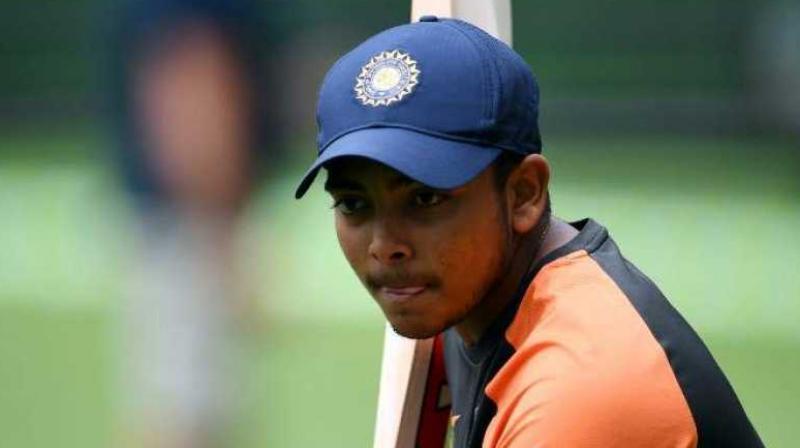 BCCI anti-doping manager Abhijit Salvi said the Indian board doesn't do its testing through the National Anti-Doping Agency (NADA) because it is concerned about its standards. (Photo: AFP)

New Delhi: India's powerful cricket board is under pressure to bring its anti-doping procedures into line with world standards after questions were raised over the ban handed to teenage star Prithvi Shaw.

Shaw, the 19-year-old prodigy often compared to Sachin Tendulkar, last week received an eight-month ban after the Board of Control for Cricket in India ruled he "inadvertently ingested a prohibited substance (terbutaline), which can commonly be found in cough syrups".

Shaw's ban was backdated to March 16, despite the fact he was playing for the Delhi Capitals in the Indian Premier League until May 8. He will be available again from November 16, just after the start of India's international season.

The BCCI insists on handling its doping analysis and sanctions in-house, rebuffing pressure from India's government and the World Anti-Doping Agency to come under the ambit of India's WADA-accredited national anti-doping body.

However, concern is growing about the arrangements, with many calling for more rigorous testing by an independent body.

"The Indian Board does not have a robust anti-doping set-up and cricketers are not regularly tested during all national and age-group competitions," The Hindustan Times said, adding that Shaw was given the "lightest sentence possible".

Last year, Indian all-rounder Yusuf Pathan also tested positive for terbutaline and received a backdated ban after the BCCI accepted he took it "inadvertently", offering the same explanation that the drug is often found in cough syrups.

Terbutaline is a bronchodilator, expanding air passages in the lungs. Such substances can raise oxygen levels in the blood, helping stamina, speed and recovery, The Hindustan Times said.

BCCI anti-doping manager Abhijit Salvi said the Indian board doesn't do its testing through the National Anti-Doping Agency (NADA) because it is concerned about its standards.

"If we would have been happy with NADA's performance then BCCI would not have had an issue," Salvi told AFP.

"I am sure you have read reports as well about NADA's inefficiencies."

He also rebuffed suggestions of a procedural lapse in the Shaw case, given his ban was backdated to a time when he was still playing.

Salvi said Shaw had probably been too "casual" by taking an over-the-counter medicine, despite attending "at least three" classes on anti-doping organised by the BCCI.

"He probably had a casual approach to it and that's why he tested positive," Salvi told AFP.

The BCCI is the world's richest cricket body and generates about 70 per cent of the sport's global revenues.

Shaw, meanwhile, is one of Indian cricket's hottest properties after he hit a century on his Test debut last year, becoming India's second-youngest centurion after Tendulkar.

India's government has repeatedly attempted to bring the BCCI into line with other sports by carrying out its drug testing through the national agency.

"A letter has been sent through NADA to the BCCI to get their players tested through them like any other sports body in the country," a source in the sports ministry told AFP last week.

"Because NADA is the only approved agency for handling dope offences. BCCI's response on this matter is still awaited. The ministry is keen for the matter to be resolved as soon as possible."

Doping cases are rare in cricket. One of the most prominent was in 2003, when Australia's Shane Warne received a year's suspension for taking a banned diuretic, blaming dieting pills given to him by his mother.

In 2006, Pakistan's Shoaib Akhtar and Mohammad Asif escaped bans for testing positive for the steroid nandrolone after the Pakistan Cricket Board accepted they did not take the drug intentionally.

One Indian cricketer, who wanted to remain anonymous, said young players shouldn't be expected to monitor what is going into their bodies.

"Nowadays players stay with a team for nearly eight-nine months in a year. They are young boys who hardly know which medicine to consume. To blame them is not right," he told AFP.

However, the sports medicine expert Saranjeet Singh, who has written a book on drug use in sport, said cricketers simply aren't tested enough.

"It's (Shaw) not a one-off case because cricket does not have the level of testing that is required to check the use of performance-enhancing drugs," Singh told AFP.

"There are numerous drugs that help in staying alert, for a better mind, to improve cardiovascular activity and strength. So drugs are everywhere from chess to horse racing.

"It's time BCCI falls under the NADA ambit to improve its credibility in picking out drug cheats."