Sports   Cricket  06 Oct 2019  Rohit Sharma: 'My job is to play in certain manner and I will try doing that'
Sports, Cricket

Rohit Sharma: 'My job is to play in certain manner and I will try doing that'

Playing his maiden Test as an opener, the 32-year-old scored 176 in his first Test innings and then followed it up with a quickfire 127. 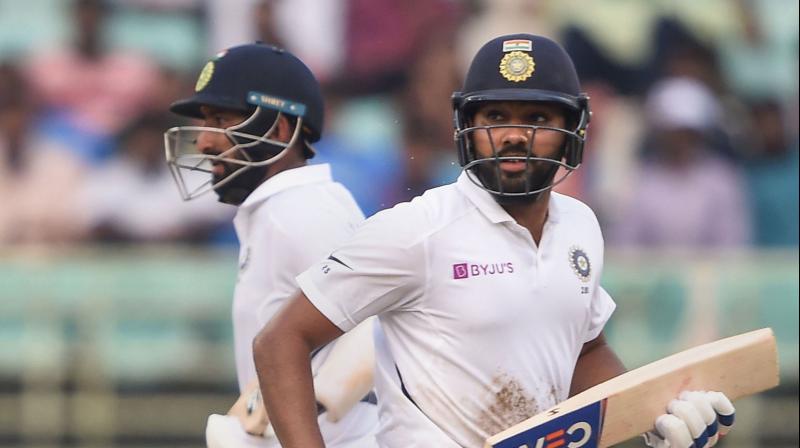 Rohit Sharma, who is India's vice-captain in limited-overs cricket, said opening the innings in the longer format didn't come as a surprise as he had already been told a few years back that such an opportunity may come his way. (Photo: PTI)

Visakhapatnam: Chief architect of India's first Test win over South Africa, opener Rohit Sharma on Sunday said that his endeavour would be to play "in a certain manner that his team expects him to".

Playing his maiden Test as an opener, the 32-year-old scored 176 in his first Test innings and then followed it up with a quickfire 127 to set up India's 203-run win over South Africa in the opening Test.

"My job here is to play in a certain manner, that's what they expect me. And I'm going to try to do that," the stylish Mumbaikar said after receiving his man-of-the-match award.

Rohit, who is India's vice-captain in limited-overs cricket, said opening the innings in the longer format didn't come as a surprise as he had already been told a few years back that such an opportunity may come his way.

"Couple of years ago it was communicated to me that I might open someday. Even in nets, I used to practice with the new ball. I wouldn't say it was a surprise," he said.

"It's a great opportunity for me at the top. Thankful for the chance, considering I've never done that before," he said.

Mixing caution with aggression was his mantra for success as he also hit a world record 13 sixes during the knock.

"No matter what ball you play, whether it's a red ball or white ball. At the start, you've got to be careful. Focus on basics - leaving the ball outside off, playing close to the body," Rohit said, adding that match awareness is also another aspect.

"Everything depends on the situation you're batting in. It's my game to mix caution with aggression, that's been my mantra."

His second-innings century came off 149 balls, which included 10 fours and seven sixes.

"In the second innings, I had to try and play some shots. It may have come off but may not have come off also. Bowlers are pretty smart these days but I backed myself and I guess fortune favours the brave," Rohit said.

Rohit broke a slew of records during his innings. He became the first batsman to hit twin tons in maiden Test as an Opener apart from the 13 sixes.

Asked about the records, he said: "There are a lot of things (that happened) in this Test, which I am not aware of in terms of records. '

"Focus was to have fun and put the team in a good position. Just wanted to go out there and do what I do best. The focus was on winning the Test match and I think we pretty much did everything right today."

One of the major architect of the win, Mohammed Shami, who returned with a five-wicket haul in the second innings, said the fast bowlers reaped the benefits of persistently targeting the stumps.

"It would always be difficult (to bat) as the wicket was slow and low. We had the plans to attack the stumps between the two fast bowlers. We have been supporting each other well for the last 4-5 years," he said.

"In the second innings, the variable bounce and reverse would be beneficial for us. It was visible that the batsman's discomfort zone was that stump-line and you can see the result.

"It was of utmost importance for us to remove the first 4-5 batsmen as soon as possible. In the first innings, of course, Ashwin was fantastic for us. The more we would attack the stumps, the better it would be for us."