Bangladesh had defeated India on Sunday by seven wickets in the first T20I of the three-match series. 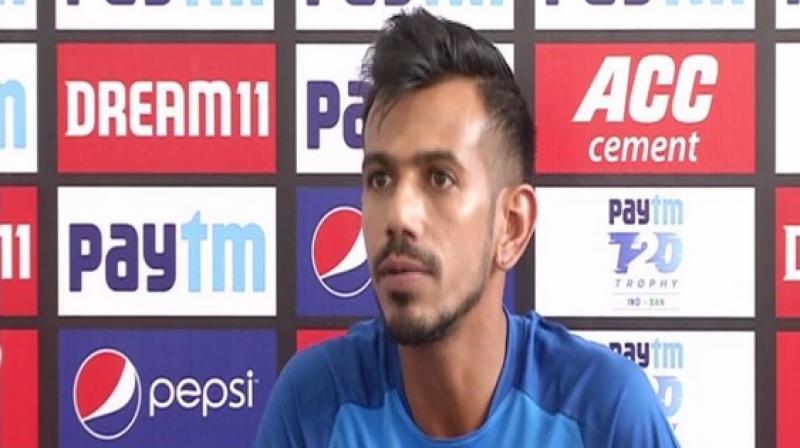 India spinner Yuzvendra Chahal on Tuesday said that the opponents should be applauded if they played well and he even appreciated Bangladesh's tough fight to the Men in Blue in recent times. (Photo:ANI)

Rajkot: India spinner Yuzvendra Chahal on Tuesday said that the opponents should be applauded if they played well and he even appreciated Bangladesh's tough fight to the Men in Blue in recent times.

"First of all, you should appreciate the opponent if they played well. You can appreciate them as they played really well in the first T20I. We know we are a better team, but Bangladesh has always given us a tough fight whenever they have played against us. Mushfiqur really played well," Chahal told reporters.

After losing the first match of the series, Chahal also said that there is no pressure from within the team management.

"It is not about pressure as it is a three-match series. We are 0-1 down, but there are two matches to go. We believe in ourselves and we are confident that we will bounce back. It's a bilateral series, there are three-matches and no matches are knockout matches. one has to win and the other has to lose, and that day Bangladesh played better than us," Chahal said.

Bangladesh lost its two key players before the series against India. Shakib Al Hasan was banned by the International Cricket Council for two years, with one year of it being suspended for not reporting a match-fixing offer.

On the other hand, Tamim opted out of the tour due to personal reasons.

"Bangladesh is a decent side even without Tamim and Shakib. We are not thinking that two guys are missing from their lineup, so they are a weak outfit," Chahal said.

Chahal gave insights on what he tries to do when he has the ball in his hand. He also said that the entire side is positive ahead of the second match.

"Every member in our 15-man squad is aware of their role. Players can have off days but there is no pressure from the management. We are positive. It is not like we haven't lost the first match of any series. The first match is done, if you think about the last match then obviously negatives will come into your mind," he added.

India will take on Bangladesh in the second T20I of the three-match series on Thursday, November 7.