It's not crash hot: Steve Smith wants to better his T20I record

The 30-year-old holds the number one spot in the ICC Test batting ranking but in the shortest format, he is yet to make his mark. 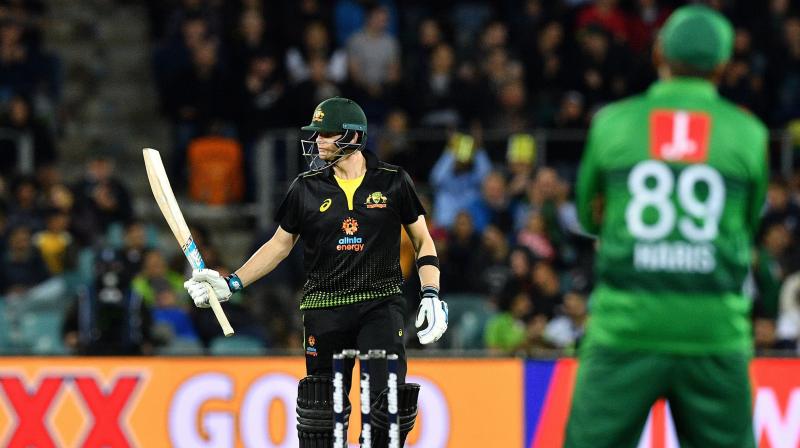 Australia batsman Steve Smith wants to improve his batting record in the T20I as he feels it is not 'crash hot'. (Photo:AFP)

Dubai: Australia batsman Steve Smith wants to improve his batting record in the T20I as he feels it is not 'crash hot'.

"If you look at my batting record in T20 internationals, it's not crash hot," International Cricket Council (ICC) quoted Smith as saying.

Smith guided his team to a massive seven-wicket victory over Pakistan in the second T20I with his impressive unbeaten 80-run knock. Australia have gained 1-0 lead in the three-match series as the first game was washed out.

The 30-year-old holds the number one spot in the ICC Test batting ranking but in the shortest format of the game, he is yet to make his mark.

Smith averaged just 27.48 in 35 matches. However, these numbers do not show the real picture of Smith's calibre as he was a leg-spinner before and batted lower down the order.

However, Smith does not doubt his ability as he expressed confidence over his 'placement and timing'.

"I guess you have to bear in mind ... [early in my career] I was batting No.8 or 9, coming in and slogging, facing half a dozen balls tops. It's never easy, so it's going to affect your record at some point," Smith said.

"I don't doubt my ability. I know the tempos of the game. I've played a lot of [T20] cricket now. I may not be as strong as some of the other guys, but I use placement and timing," he added.

Australia will compete against Pakistan in the third T20I on November 8.