Each of these tours poses a different challenge because the conditions and players involved are different. 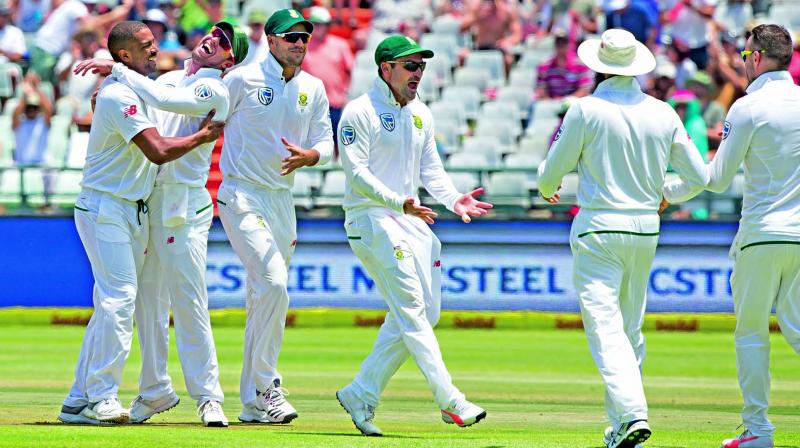 The first couple of day’s play in the opening Test against South Africa held out clear indication that this will be a tumultuous year for Kohli & Co: major rewards are on offer, but not without serious scrutiny of talent and temperament of the players.

On a spicy Newlands pitch, India’s ploy of playing four fast bowlers paid rich dividends. All four were impressive — Bhuvaneshwar Kumar particularly so — and South Africa were dismissed for under 300 after winning the toss.

But there was a swift reality check as India’s own batting top order was left in a shambles, three wickets gone, before the first day was through. It didn’t get any better in the first two sessions on the second day, which is when this piece is being written.

For the record, apart from three Tests in the current series against South Africa, India play five against England when touring that country mid-year and four against Australia Down Under towards the end of 2018.

Each of these tours poses a different challenge because the conditions and players involved are different. The common thread running in all three is the onus put on the Indian players — individually and collectively — to prove that they can excel overseas against pace.

India’s current no. 1 ranking in Tests has been built around a fabulous winning streak beginning in mid-2015. In the period since, Kohli’s team have beaten Sri Lanka (thrice), South Africa, the West Indies, New Zealand, England, Bangladesh and Australia.

This is an enviable run of success. But because all triumphs — barring against lowly West Indies — have come in the Indian sub-continent, there was the rider attached about the true worth of the side: would it be as effective playing abroad.

India’s away Test record overall is mediocre; or modest if one wants to be charitable. The last overseas Test win — not counting Sri Lanka or West Indies — came in 2014 against England, but the series was lost badly. For the last overseas series win, one has to go back to 2007 versus England.

This is unedifying for a country where cricket (and cricketers) are worshipped, where the sport is played by the largest number, and the rewards offered to its players are perhaps better than anywhere else in the world: at least in real income terms.

All things considered, 2018 is hoped to be a breakthrough year. Three major overseas tours, including two countries (South Africa and Australia) where India have never won a Test series earlier, provide massive opportunity and incentive for rewriting the script.

Moreover, the team seem to possess the wherewithal to actualise such expectations. There is depth of experience as well as some gifted youngsters. And led by a captain who — like his emotions — wears his ambition on his sleeve.

The big boost comes from the plethora of fast bowlers available.

The squad in South Africa has six quicks (including Hardik Pandya), unprecedented in Indian cricket history, but which makes possible for Kohli to fight pace fire with fire possible.

Given how five sessions of the first Test have gone, the questions being asked are whether India made the right decision in playing only five specialist batsmen, and leaving out Ajinkya Rahane? I’d say yes to the first, and 50-50 to the second.

To win, teams need five bowlers. There is some risk, but well worth it unless the primary desire of the captain and team is not to lose. Where Rohit over Rahane is concerned, it was a choice between a batsman with a good overseas record but in poor nick and another in cracking form.

The outcome of this Test is still unknown, but the hardship of playing overseas has been brought home clearly to the Indian team. And this is likely to be the tenor of play through the year. The warning gong has been sounded.