SA vs IND: Pandya to the rescue 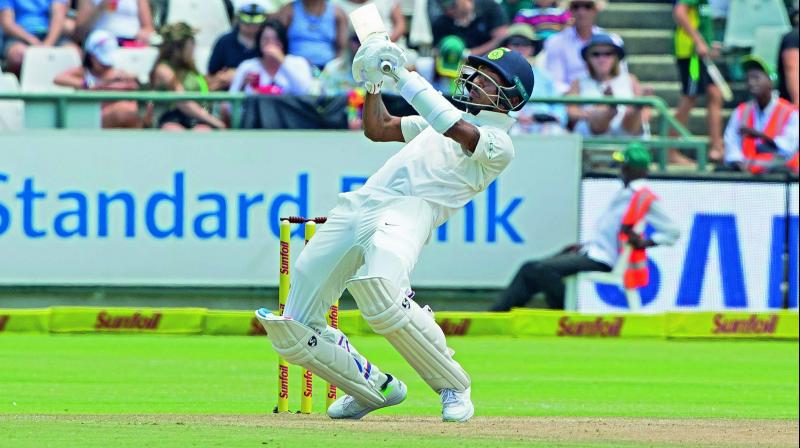 Cape Town : It was Hardik Pandya’s day at Newlands on Saturday.

The India all-rounder scored a strokeful 95-ball 93 to emerge as the highest scorer for the visitors as India’s first innings folded for 209 on the second day of the first Test in reply to South Africa’s 286.

Hardik then sparkled with the ball as he took two wickets to reduce South Africa to 65/2. At stumps, the hosts were leading by 142 runs.

Earlier, Pandya added 99 runs with Bhuvneshwar Kumar (25) for the eighth wicket to keep India afloat in the match.

India had been in deep trouble at 92/7 in the first half hour after lunch. Pandya found a determined ally in Bhuvneshwar, who took 34 balls to score his first run, more than doubling India’s total.

Pandya’s aggression was in stark contrast to the rest of the Indian batting. The tourists scored only 48 runs for the loss of one wicket in 25 overs against South Africa’s four-pronged pace attack in reaching 76/4 at lunch.

They then lost three more wickets in the first six overs after lunch, two of them to Vernon Philander, who had figures of 3/33 at tea.

The other wicket fell to Dale Steyn, who took 2/51. Steyn left the field shortly before tea after bowling three balls of his 18th over.

He did not return to the field immediately after tea and a South Africa spokesman said he was receiving treatment for a bruised heel.

Pandya rode his luck, particularly against Steyn, surviving on a review after being given out caught behind off Steyn on five and he was dropped by Dean Elgar at gully off Steyn when he had 15. But Pandya played some handsome strokes as he reached his fifty off 46 balls.

He survived a second chance on 71 when Quinton de Kock missed a stumping off left-arm spinner, immediately after Pandya had hit the spinner’s second ball of the match for six.

Cheteshwar Pujara led a stout battle of a different kind in the morning session, reaching 26 from 91 balls at lunch, but was out the first ball after the interval as he edged Vernon Philander’s (3/33) delivery to Faf du Plessis at second slip.

When R. Ashwin (12) and Wriddhiman Saha (0) followed shortly afterwards India were reeling at 92/7, facing a massive first innings deficit. After resuming the day on 28/3, India scored just 17 runs in the opening hour, a mixture of well-judged leaves and the ball whistling past the edge of the bat. Philander bowled an excellent line and it took the tourists 34 balls to squeeze a run off him, which was all he conceded in a six-over spell.

It was a game of patience for the hosts but they were eventually rewarded when Kagiso Rabada (1/15) trapped Rohit Sharma for a painstaking 11 from 59 balls.

99 Partnership between Hardik Pandya and Bhuvneshwar Kumar was the second best for the eighth wicket in South Africa. The best stand is 101, by Praveen Amre and Kiran More in the drawn Test of 1992.

101 Number of wickets for Vernon Philander at home in 23 Tests. Philander completed his 100 when he scalped Cheteshwar Pujara.