SVIS too hot for Rizvi again

Coach Lad turns a mixed school team of state, out of state and overseas players into winning bunch. 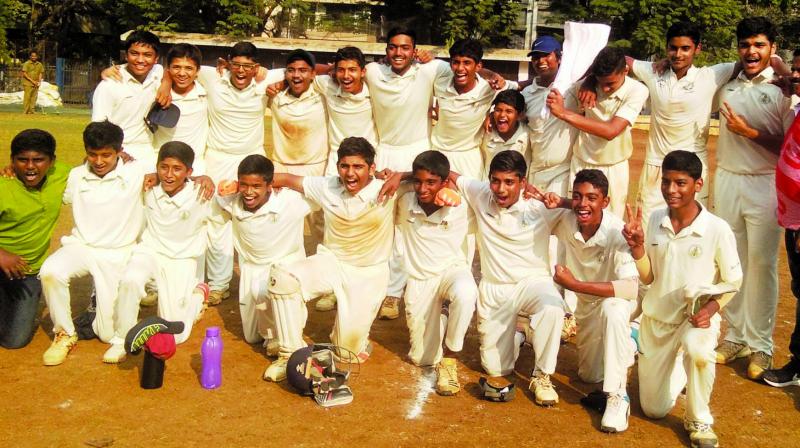 Swami Vivekanand International School players pose for a photo after the match.

Angkrish Raguvanshi, Sourabh Singh continued their form with bright contributions with the bat while allrounder Ayush Jethwa played a lead role with the ball this time in the final to star in 21-run win. SVIS had won last time the title two years ago after beating same opponents. Last year Rizvi had won the title beating IES New English HS, Bandra in the final.

SVIS coach Dinesh Lad who plotted the win was elated after making a double over Rizvi who dominate the inter-school cricket by earning regular trophies. “Rizvi are a champion team so it is always great to meet them. It brings out the best in my boys. We had planned well for this match as usual and players executed it well. Even though we didn’t score many runs on the board we were positive to defend it,” said Lad.

Raguvanshi (73) and Sourabh (67) along with openers Atharav Desphande (40) and Ishaan Roy (43) ensured that they hit up a fighting total of 263 for the loss of eight wickets in the allotted 45 overs. For Rizvi, medium pacer Moin Khan (5/66) and Inaam Qureshi (3/50) impressed with the ball.

Chasing 264, Rizvi openers Prince Singh (32) and Abhinav Singh (35) did well to put on 67 runs. Thereafter, Mayank Tiotya, who had scored century in the semi-finals, did well to score 32 while Mohit Tanwar going for big hits fell in the deep for 48. But the lower order batsmen failed against the pace and spin attack of Karan Patole (2/30) and Ayush (3/81), as Rizvi were bowled out for 242 in 43.4 overs.

Lad, who is the father of Mumbai Ranji Trophy skipper Siddhesh Lad and has produced top international cricketers like Rohit Sharma and Shardul Thakur praised his team for solid display. He also singled out players like skipper Ayush, Sourabh, Raguvanshi for their consistent show.

“We had a good team, most of them are in the probables list of Mumbai Under 16 and Under 19 teams. Guys like Ayush, Sourabh and Angkrish are good prospects and they showed it well in this tournament by being consistent,” Lad said.

He also praised the contributions from batsman Ishaan and medium pacer Aryan Badhe through out the tournament. Both overseas players have shifted to Mumbai from America and Singapore respectively to play cricket.

“We have many players in our school from outside state and also outside the country. Ishaan and Aryan have enrolled in our school after contacting me online and I gave them chance after conducting their trials. They are both good players and did well in this tournament. The 13-year-old Ishaan has played for Mumbai sub junior team while Aryan made into U 19 team recently,” Lad informed.