A 3-0 lead in the five-match series will be a perfect farewell gift for Dhoni, who will be wearing the jersey for the last time at his home. 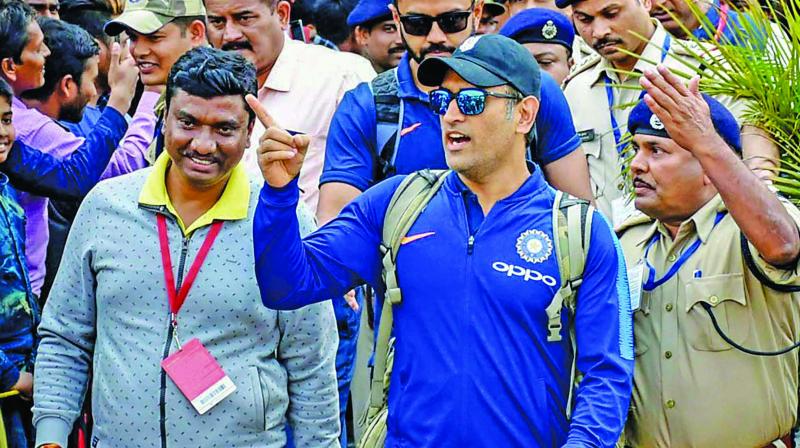 There has been a sense of déjà vu every time Dhoni has stepped on to the field in the ongoing series. (Photo: PTI)

Ranchi: Mahendra Singh Dhoni's final homecoming forms a poignant subplot of an utterly dominant Indian team's quest for an unassailable 3-0 lead in the third ODI against Australia here on Friday.

A 3-0 lead in the five-match series will be a perfect farewell gift for Ranchi's favourite son, who, in all likelihood, will be seen wearing the India Blues for the last time at his home ground.

There has been a sense of déjà vu every time Dhoni has stepped on to the field in the ongoing series.

It reminded many of Tendulkar's penultimate Test series against Australia in 2013, when the cheer from the stands would amplify with each passing match.

Something similar has been happening at every ground in this series, with the fans possibly beginning to realise that the legend may not be around when India next play at home.

Amidst the emotional side story, the Indian team is grappling with a few teething issues regarding its top-order batting, especially senior opener Shikhar Dhawan's poor form, which has affected India's starts of late.

Despite Dhawan having gone off the boil with only two half-centuries in the last 15 ODIs, India are unlikely to tinker with the winning combination of the first two encounters.

KL Rahul, who is back in form, may have to wait till India clinch the series, but the team management could well try him out at the No. 3 position.

The two victories -- by six wickets and eight runs -- weren't exactly convincing but pulling off close matches under pressure will certainly add to the confidence.

"Just coming through these kinds of games gives us confidence. It's important to look ugly at times, and come through and win. We might get these low-scoring games in the World Cup as well," Kohli had said after the second game.

The bowling has been superb in both games with Australia failing to reach 250 but save Virat Kohli, who stamped his class with another hundred on a slow Jamtha track, none of the other batsmen have looked the part so far.

Vice-captain Rohit Sharma, the second most consistent player in this line-up, looked good in the first game before he got out.

Kedar Jadhav and Dhoni shepherded India in the first match and didn't trouble the scorers in the next.

Ambati Rayudu, whose only significant knock was the 90 against New Zealand in the last away series, has also been inconsistent and can be replaced with Rahul.

Rayudu, who has retired from first-class cricket, has found it difficult and his primary problem has been not being able to rotate the strike.

If Dhawan is persisted with, the best way to give Rahul at least three games is to bring him at No. 3 and the skipper coming at No 4 in place of Rayudu.

There are no such worries about Indian bowling as they have performed as a unit. The biggest gain in the second game has been Kedar Jadhav and Vijay Shankar performing their combined role of a fifth bowler to perfection.

Shankar's two wickets while bowling the final over will also instil confidence in his captain that in case Hardik Pandya has a breakdown, he has a fallback option in the Tamil Nadu all-rounder.

However, he is still not somebody who can bowl six to seven overs consistently in each game.

Mohammed Shami and Jasprit Bumrah have been outstanding in the two games so far. If Shami was lethal during the opening spell of the first game, Bumrah set it up with another incredible effort at the death in the second.

One who is quietly inching towards a slot in the World Cup-bound squad is Ravindra Jadeja, who has bowled brilliantly in those middle overs in tandem with Kuldeep Yadav.

Siddarth Kaul has gone back and it's clear that he is not the back-up pacer while Bhuvneshwar Kumar is back after being rested.

His direct throw to get Peter Handscomb run-out once again proved his utility in the field, more so in the 30-yard circle.