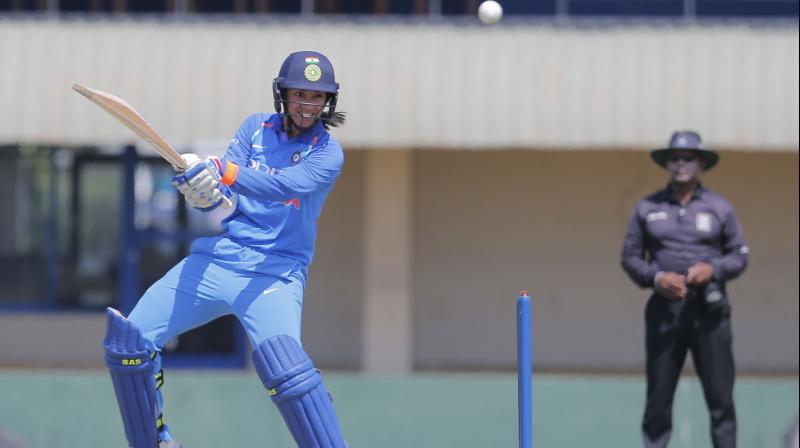 CRICKET BAT OR A SABER: Smriti Mandhana demonstrates her big-hitting prowess during a one-day game for India against Sri Lanka. AP Photo

Hyderabad: Sure, she hasn’t been in the best form in the recent times, but Smriti Mandhana is the star batswoman all cameras may turn to on Sunday when India play Australia for their maiden World T20 title.

Smriti has a reputation for shredding rival bowlers. So much so, accomplished bowlers like Australia’s Megan Schutt dread to bowl to her. On the day Australia qualified to meet India in the final, Schutt was quoted as saying that she is wary of bowling to Smriti Mandhana and Shafali Verma in powerplay.

Bowlers seldom betray such fears about any batter but like Shane Warne had once confessed that Sachin Tendulkar gives him nightmares, Schutt admitted that she wouldn’t want to bowl to these two Indian batswomen.

That’s the kind of reputation Smriti Mandhana has among bowlers the world over.

Smriti Mandhana’s tryst with the game began when as a child she used to accompany her older brother Shravan to the nets. When Shravan, an aspiring cricketer who made it as far as Maharashtra Under-19s, went for his cricket practices, little Smriti used to tag along with him. While it was her father who gave Smriti her first ever practice by throwing balls at her, Smriti’s career blossomed soon and she went places.

Recognising her talent and ball sense, her father took Smriti to a professional coach, and not much later than at the age of nine, she joined the Under-15 team for Maharashtra. At 11, she was picked for the Maharashtra Under-19 team.

What brought Mandanna to the spotlight was the West Zone Under-19 Tournament held in Vadodara in October 2013. Playing for Maharashtra, she scored a roaring 224 off 150 balls, becoming the first Indian woman to achieve a double-hundred in a one-day game.

Her maiden international hundred was in 2016, in her second ODI game on India’s tour of Australia. She scored 102 off 109 balls.

However, in the year that followed (2017), she suffered an anterior cruciate ligament rupture, during her time at Australia’s World Big Bash League in January. During the recovery period, she missed out on the World Cup qualifier. However, she began the World Cup with a 90 against England in Derby, in the first of the group matches.

In February 2019, the responsibility of the India’s Women T20 International team came upon her as captain, making her the youngest T20I captain for India.

All one needs to know about Smriti Mandhana