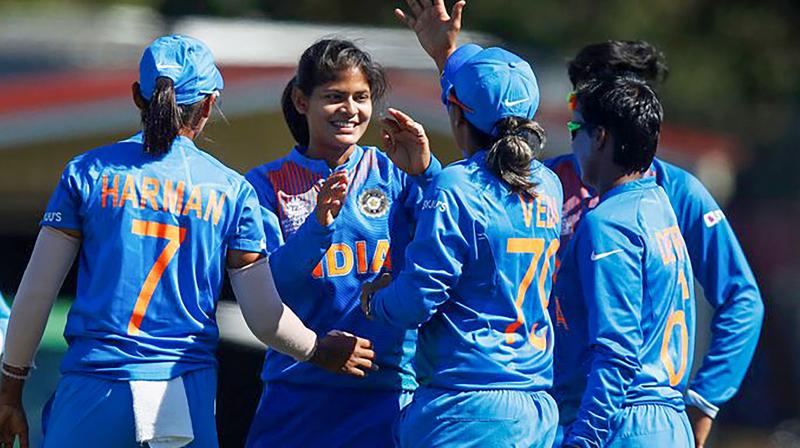 Indiann celebrate the fall of a Sri Lankan wicket during their T20 World Cup match at the Junction Oval in Melbourne. PTI Photo

Melbourne: History may be in favour of Australian women, but for the first time it they will face a tough nut in India to lay their hands on the World T20 Trophy for the fifth time.

Notwithstanding Australian captain Meg Lanning's comment that her team is "pumped" for their defence of the World Cup title against India on Sunday, in the heart of hearts she knows that it is easier saying than doing.

With more than 90,000 fans expected to cram the cavernous Melbourne Cricket Ground, the hosts go into the final as favourites, courtesy of being the sport's dominant side, winning four of the six tournaments so far, in contrast to Harmanpreet Kaur's India, who are in their first championship match.

But with large numbers of Indian fans expected in the 100,000-capacity arena, there will be little in the way of home advantage. Organisers have set their sights on beating the official world attendance record for a women's sporting fixture on Sunday, to coincide with International Women's Day.

That was set at the 1999 football World Cup final, when 90,185 watched the United States beat China at the Rose Bowl in California.

While widely accepted as the benchmark, an estimated 110,000 are said to have attended the Mexico-Denmark women's World Cup Championships final in 1971, but it was not a sanctioned event. As of Friday, more than 75,000 tickets had been sold.

Pop superstar Katy Perry, who this week revealed she is pregnant, has been recruited to help get punters through the turnstiles, performing before and after the game.

The final will be a repeat of the tournament opener, when India upset Australia by 17 runs after leg-spinner Poonam Yadav ran riot. It made every game afterwards a virtual must-win for Lanning's team, and they rose to the task despite tournament-ending injuries to Tayla Vlaeminck and Ellyse Perry.

India went through the group phase as the only unbeaten side, on the back of quality spin bowling and the exploits of teenage batting prodigy Shafali Verma.

However, Indian skipper Harmanpreet feels that the forced eight-day break has affected India's preparations but says the team is ready to rise to the occasion.

India had defeated Sri Lanka in their last game on Saturday, followed by a semifinal washout, which meant the visitors haven't played for the last eight days and Harmanpreet conceded her team has been 'restless'.

"We haven't been outdoors much and we didn't manage to play the important game against England," said Kaur on the eve of the final against record four-time champions Australia.

"Of course, that allowed us the much needed rest because when you're playing for a long time, you need a break."