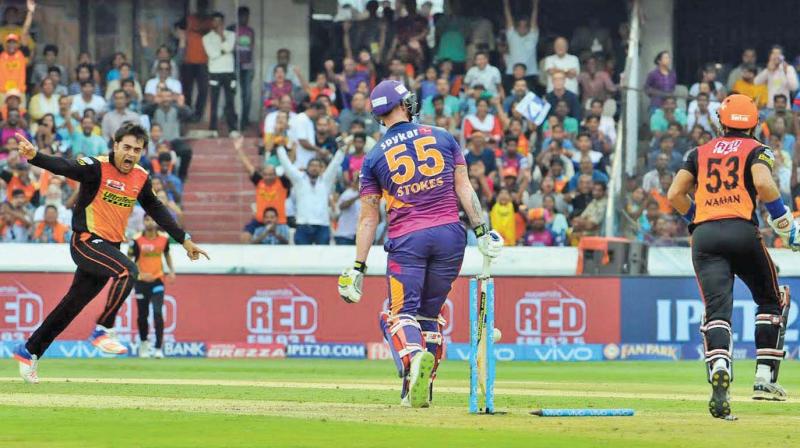 Hyderabad: Jayadev Unadkat took a last over hat-trick and finished with the figures of 4-1-30-5 while Ben Stokes stood tall in all three departments of the game as the giants from Pune became the first team to conquer the Orange Army’s fortress at the Rajiv Gandhi International Stadium here on Saturday.

With the hosts needing 13 off the last over Jayadev Unadkat delivered a three-wicket maiden dismissing Bipul Sharma, Rashid Khan and Bhuvneshwar Kumar to take his team to the second position on the points table replacing Kolkata Knight Riders.

Chasing a modest 148, Sunrisers made a decent start as Shikhar Dhawan led the charge by smashing Unadkat for two boundaries in the first over and a six in the third before being bowled out by Stokes in the fifth over off a delivery that stayed a tad low. Kane Williamson too departed in the same over with just four runs against his name.

However, the in-form David Warner and Yuvraj Singh stood firm and stitched a brilliant 54-run partnership for the third wicket before captain Warner was removed by the million dollar Englishman. The home captain made 40 from 34 deliveries.

Post Warner’s dismissal, Yuvraj kept the scoreboard ticking even as he failed to get much support from the batsmen at the other end. It was Unadkat who turned out to be the game changer for Pune as he struck in the 18th over to get rid of the dangerous Yuvraj, who carved out a brilliant 47 before being caught by Rahul Tripathi at deep point.

Earlier, after inviting the visitors to bat, the hosts tightened the screws on Smith and Co. who failed to fetch boundaries till the fifth over which eventually resulted in wickets falling at regular intervals. It was after 32 balls that Ajinkya Rahane dispatched a maximum off Siddarth Kaul over long-on.

After Rahane’s dismissal, Stokes joined the party and dealt only in sixes as he dispatched two back-to-back big hits off Bipul Sharma in the 11th over followed by another six in the 13th sent down by the same bowler. Interestingly, he was the one to hit first boundary of the innings, in the 14th over bowled by Kaul.