'India vulnerable but will pose a tough hurdle for Australia': Allan Border

Though India won comfortably beat South Africa in their World Cup opener on Wednesday, Border said it was not a convincing performance. 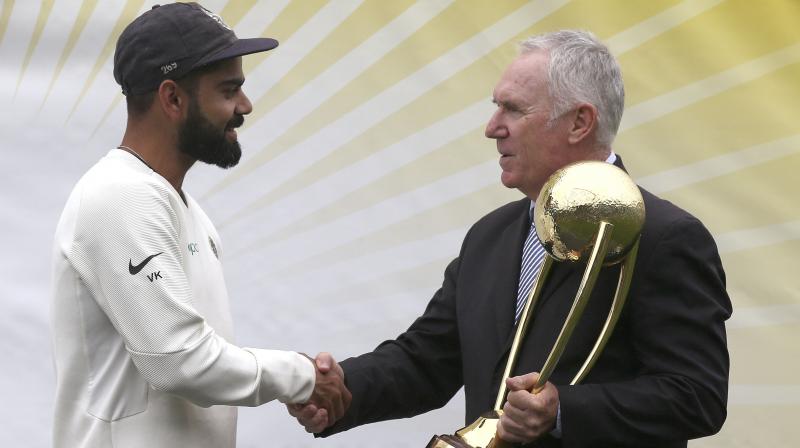 The former Australia captain said the game against a top team like India will give them a better indication where they stand at the moment. (Photo: AP)

London: India will pose a tough hurdle for Australia despite their "vulnerabilities", feels the great Allan Border ahead of the high-profile World Cup clash here on Sunday.

Australia are on a roll having won their last 10 ODIs, including the three victories on the trot against India in March when they came from behind to beat Virat Kohli and Co 3-2 in an away series.

Though India won comfortably beat South Africa in their World Cup opener on Wednesday, Border said it was not a convincing performance.

"I think they (India) got out of jail a little bit the other day, the South Africans played pretty well but they are just not scoring enough runs, and then Rohit Sharma kept it all together for the Indians," wrote Border in his column for the ICC.

"India have got some vulnerabilities, but they also have some world-class performers in Sharma, Virat Kohli, Jasprit Bumrah and the rest  it's a pretty handy side!"

The former Australia captain said the game against a top team like India will give them a better indication where they stand at the moment. The Aaron Finch-led side got the better of Afghanistan and West Indies in their first two games.

"If you can win games without playing your best, obviously you want to build to your best, that's what a time like this is about and India next up will be a big stumbling block.

"That's a tough hurdle for Australia but once they've played a couple of decent teams, they will have a better idea of where they are at with regards to the rest of the tournament," said Border.

With the tournament already witnessing some unexpected results, Border said it has made the World Cup more open. Bangladesh beat South Africa and Pakistan snapped an 11-game losing streak by downing tournament favourites England to spice up the tournament.

"All the sides are basically showing they can beat each other, that's the main thing that's come out of these early games, there's no obvious runaway-looking team at the moment.

"West Indies will clearly be one of those sides to keep an eye on, they look really dangerous, but Australia are progressing nicely so far and will be happy with their start to the tournament," Border added.