Sports   Cricket  07 Aug 2019  Rishabh Pant can surely be the no 4 batsman for India but seniors need to guide him
Sports, Cricket

The pair of Pant and Kohli came to the centre stage at 27 for 2. 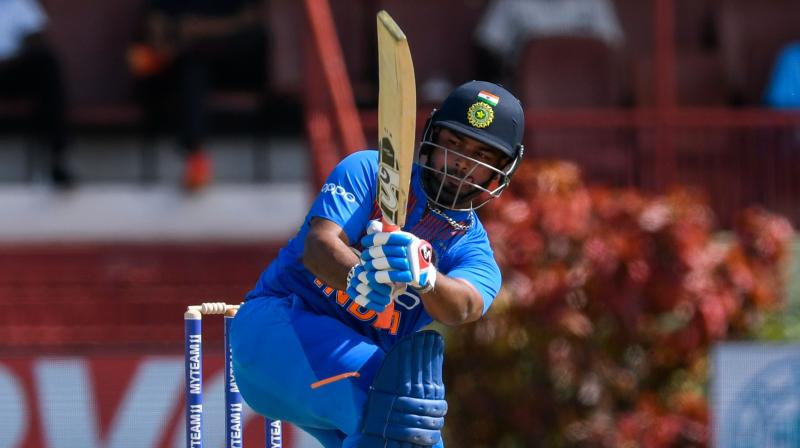 On August 6, 2019, we saw a new side of Rishabh Pant after he played a sensible yet aggressive knock of 65 off 42 balls to steer his side home. With Rishabh Pant and Virat Kohli’s sensible knock, India got out of a tense situation to clinch the T20I series against West Indies 3-0. (Photo:AFP)

Mumbai: On August 6, 2019, we saw a new side of Rishabh Pant after he played a sensible yet aggressive knock of 65 off 42 balls to steer his side home. With Rishabh Pant and Virat Kohli’s sensible knock, India got out of a tense situation to clinch the T20I series against West Indies 3-0.

However, during Pant’s knock, skipper Virat Kohli kept the 21-year-old young blood in check, as the Delhi Capitals’ player didn’t play any rash shots early on, until the 13th over when Pant finally started charging, getting his first six – a flat hit over extra cover of Keemo Paul's bowling.

During India’s chase, Shikhar Dhawan and KL Rahul got out early on, as the openers got dismissed to leave the onus of chasing on skipper Virat Kohli and left-hander Rishabh Pant.

The pair of Pant and Kohli came to the centre stage at 27 for 2. Since Kohli walked in to bat, the skipper ensured that Pant doesn’t play any hurried shot throughout the 106-runs stand.

As the duo progressed to make a formidable stand, Kohli skipper provided valuable suggestions which might have made Pant secured and composed as he didn’t tried to play any shot on impetuosity which he has done in the 2019 World Cup matches and in the previous two T20Is as well.

Kohli’s presence proved to be effective as the 30-year-old Indian instilled a certain sense of game awareness inside the youngster. Chasing a target of 147 on a slow pitch, captain Kohli notched up an anchoring innings of 59 off 45 balls along with Pant who scored unbeaten 65 off 42 balls. The duo’s presence ensured that India achieved the target in 19.1 overs.

During the league games against England and Bangladesh, the 21-year-old had shown massive striking ability by scoring quick fire cameo of 32 and 48 respectively. However, in the semi-final match against New Zealand, the Delhi Capitals opener had scored 32 from 56 balls in that match.

In a crunch game, the youngster came under pressure and played a needless shot to leave the team reeling under pressure even after the team lost four early wickets in quick successions.

Following the 2019 World Cup exit, Rishabh Pant was under the scanner for exhibiting his aggression and getting out softly. Earlier, after Pant was drafted into the World Cup squad, a few eyebrows were raised.

Coming back to the T20I series versus West Indies, the left-handed batsman again got out cheaply after scoring 4 and 0 in the first two T20Is.

Apart from batting, the team management, fielding coach R Sridhar and selectors have stated that Rishabh Pant will be groomed for wicket-keeping and fielding abilities.

MS Dhoni, who has taken two months break from international cricket, has been requested by the team management and selectors to not retire until Pant gets properly groomed before the 2020 T20 World Cup which will be held in Australia.