Man of the match Yadav finished with figures of 2/16 in 4 overs, complemented well by Jasprit Bumrah's (2/17 in 3 overs) toe crushing yorkers. 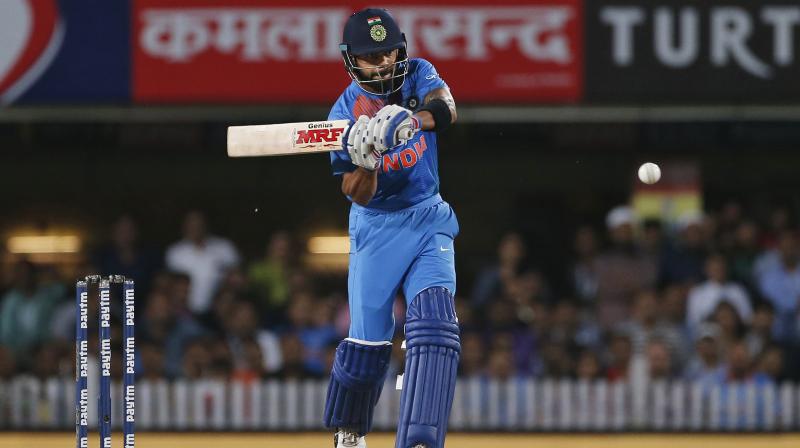 Ranchi: Skipper Virat Kohli played a sweetcameo after yet another impressive show by the bowling unit as India comfortably beat Australia by nine wickets in a rain-curtailed opening T20 International, here tonight.

It was the seventh consecutive win for India in the shortest format having last against the Aussies, way back in 2012 at Dhaka in the ICC World T20.

After chinaman Kuldeep Yadav (2/16 in 4 overs) yet again bamboozled the visitors alongside Jasprit Bumrah (2/17 in 4 overs) which saw them score 118 for 8 in 18.4 overs, India were left to chase a revised target of 48 in 6 overs via Duckworth-Lewis method.

Skipper Kohli's 14-ball-22 had three boundaries and Shikhar Dhawan also hit three boundaries in his unbeaten 15 as they cruised to the target in 5.3 overs, taking a 1-0 lead in the three-match series.

Rohit Sharma hit debutant left-arm pacer Jason Behrendorff for a boundary and flicked nathan Coulter-Nile for a six beforte being cleaned up.

However the third over bowled by Andrew Tye decisively clinched the match in India's favour as Dhawan and Kohli got a boundary each to get 11 runs. After that it became a cakewalk as coulter-Nile's next over produced nine runs.

With six needed off the final over bowled by Dan Christian, Kohli smacked the third delivery for a boundary to finish it off in style. Opting to bowl, Kohli's bowlers did not take their foot off the pedal as Australia were restricted to a meagre 118 for 8 when rain stopped play after 18.4 overs. Australia's batting woes continued as they once again failed to read Kuldeep Yadav's left-arm wrist spin.

Man of the match Yadav finished with figures of 2/16 in 4 overs, complemented well by Jasprit Bumrah's (2/17 in 3 overs) toe crushing yorkers. Yuzvendra Chahal (1/23 in 4 overs) also played his part to perfection. Hardik Pandya and Bhuvneshwar Kumar got a wicket apiece.

Australia were off to a flyer with 50 runs coming off 37 balls but Chahal provided the vital breakthroughs, dismissing his bunny Glenn Maxwell for a fourth time in four games.

Maxwell, who is often called 'Big Show' for promising much and delivering too little as he gave a simple catch to Bumrah at short mid-wicket.

This was after Kuldeep dismissed Aaron Finch (42) and Moises Henriques (8) off successive overs.

It was Finch's dismissal that brought about Australia's downfall. Finch looked in fine form with four boundaries and one six but against Yadav, he looked determined to play the sweep shot. After playing five sweep shots, Yadav bowled one fuller that breached his defence.

The wicket virtually sent alarm bells ringing in the Australians camp as Yadav and Chahal went through the middle overs restricting their flow of runs before Bumrah's twin bursts in the 18th over.

Earlier, David Warner made his intent clear with successive boundaries off Bhuvneshwar Kumar in the first over. Warner looked for a third boundary with a similar slash but was played on, done in by the length as Bhuvneshwar had the last laugh in a battle between the two Sunrisers Hyderabad teammates.