Irfan dismissed Gambhir 4 times during that series and he played only one more ODI series for India (vs England) before being dropped. 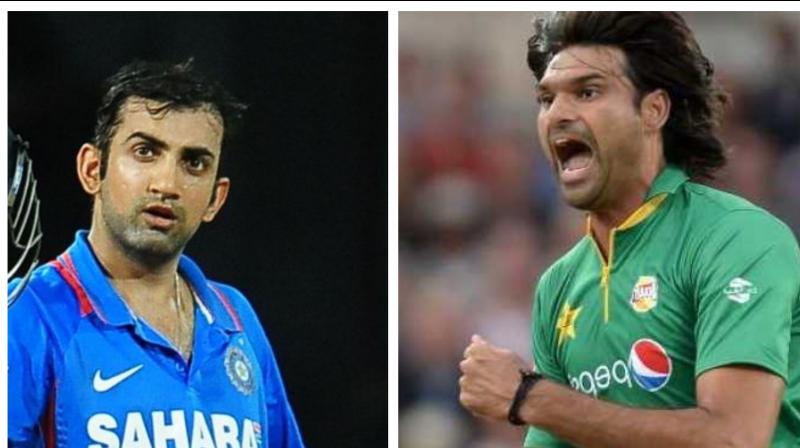 Standing tall at 7ft 1 inch, Irfan dismissed Gambhir four times during that limited overs series (T20s and ODIs) and the southpaw played only one more white-ball series for India (vs England) before being dropped.

"When I played against India, they were not comfortable batting against me. Some of them told me in the 2012 series in India that they couldn't sight my ball properly because of my height and also didn't read my pace," Irfan told the 'Samaa' channel.

Irfan claimed that it was that particular series that ended Gambhir's career.

"He (Gambhir) didn't like to face me in match or when both teams had nets, I always felt he avoided eye to eye contact with me. I remember I got out him four times in the 2012 limited over series and he was unnerved against me," Irfan said.

Gambhir played his last T20 for India against Pakistan at Ahmedabad in that series.

He also appeared in just one more ODI series against England after facing Pakistan in the winter of 2012/2013 and was never picked in white ball format by India again.

To a question, Irfan said he wouldn't say anyone was "scared of him" but when he went out, people congratulated him for ending Gambhir's white ball career.

He recalled in the interview that Virat Kohli had told him while batting against him, that he didn't read his pace properly.

"He told me he thought I would be around 130-135 kph but I had increased my pace and I was bowling around 145 kph and he had problems picking me up. Once when he was batting he tried to pull a good length ball and missed.

"Yuvraj (Singh), who was at the other end told him in Punjabi. Don't try to pull him, rather try to cut him. Off my third ball, he went for a pull and was caught behind. Yuvi Paji told him... now go back," Irfan recalled.