Rishabh Pant is a 'young kid, learning his craft and one-trick pony'

The 22-year-old has received lots of flak lately from India’s coaching staff, and pundits after losing his wicket through loose shots. 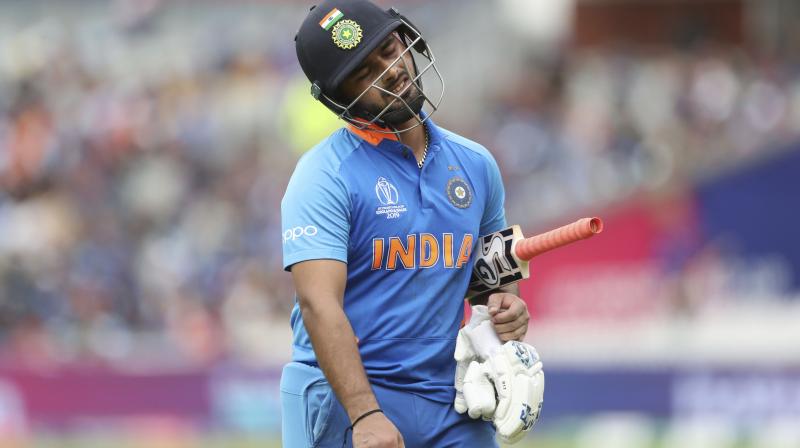 India batsman Rishabh Pant needs to improve his off-side game if he wants to graduate from being a one-trick pony, former Australia batsman Dean Jones has told Reuters. (Photo: AP)

Mumbai: India batsman Rishabh Pant needs to improve his off-side game if he wants to graduate from being a one-trick pony, former Australia batsman Dean Jones has told Reuters.

The young stumper-batsman is perceived as Mahendra Singh Dhoni’s natural successor in limited overs cricket for India when the former captain eventually hangs up his gloves.

But the 22-year-old has received lots of flak lately from India’s coaching staff, pundits and the media after losing his wicket through loose shots and his position in the India test side has been taken by fit-again Wriddhiman Saha.

“He needs to work more on his strokeplay through the offside. At the moment, he’s just a bit of a one-trick pony.

“We know he’s got an off-side game, he’s just got to work more. It wouldn’t take long to change but he needs to be very specific in his training programme right now.”

Jones, an expert for Star Sports’ Select Dugout, cited the example of South Africa stumper-batsman Quinton de Kock, who top-scored for them in the recent Twenty20 series in India.

“Quinton de Kock changed his game, that was very evident in the last T20 series against India,” said Jones, who played 52 tests and 164 one-day internationals for Australia.

“Everyone thought he struggled to hit the ball between point and mid-off and they bowled there. But through lots of net practice and good technique work, he hit a lot of boundaries.

“And all of a sudden they couldn’t line him up properly because he had other options to score.”

Pant played 11 tests in the absence of the injured Saha and used his chances well, hitting a century in an Oval test against England last year while smashing an unbeaten 159 versus Australia in Sydney in January.

His six-hitting ability makes him a limited-overs asset, but India head coach Ravi Shastri and batting coach Vikram Rathour have said in recent interviews that the left-hander’s shot selection has occasionally let the team down.

Pant played within himself and seemed to curb his natural instincts in his 26-ball knock of 27 during India’s loss to Bangladesh in the first T20 in Delhi on Sunday.

“When you are going through a bad phase you start doubting your strokeplay,” Jones said. “Ultimately you’ve got to go with the gut feel when you play T20 cricket. And at the moment I think he’s second guessing his talents.

“We want him to be a 360 degree style player but at the moment he feels to me that he’s only 180. He only scores down the ground or on the leg side and once you get a player doing that, you can control them and shut them down.”

India’s quest for the perfect number four batsman dominated the headlines in the lead-up to this year’s 50-over World Cup in England, where they went out in the semi-finals to New Zealand, and they continue to fret over the position in T20s too.

With India boasting a top three of Rohit Sharma, Shikhar Dhawan and talisman Virat Kohli, Jones thinks the number four batsman should be one who can hold the innings together when the side suffer an early loss of wickets.

“The number four is a very difficult spot. They’ve got eight series now or 29 matches minimum to work out who is their number four. But the key is let that person have five to six games. If it doesn’t work then change it.

“It’s normally a technical player who’s got good technique to do that job... You need a player who can stop the bleeding, not so much a player to go and belt it.”