Dhananjaya de Silva slams ton and Roshen Silva chips in with an unbeaten 74 to defy India. 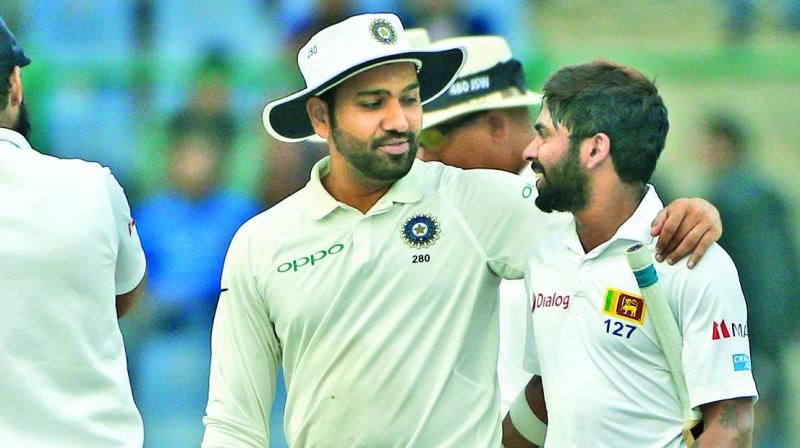 New Delhi: Blue skies and unused light towers. A sea change greeted all comers at the Kotla from 24 hours earlier when a hazy smog and floodlights dominated the cricket. And fittingly, a plucky Sri Lanka made the most of improved conditions to squeeze out an unlikely draw on the fifth and final day of the third Test against India here on Wednesday.

Dhananjaya de Silva stood tall after the visitors had lost senior batsmen Angelo Mathews (1) and skipper Dinesh Chandimal (36) to set the platform for the lower order. He was at the crease when Sri Lanka, resuming at 31/3, lost Mathews (35/4) but at no stage did the 29-year-old, look to be under any sort of pressure.

The 1-0 margin gave India their ninth series victory in a row, the first Test at Kolkata ending in a draw, the second won at Nagpur by an innings and 239 runs, followed by this draw here on the day. Virat Kohli was adjudged both man of the match and the series for his 610-run aggregate that included two double-centuries in succession.

Playing only his 11th Test, Dhananjaya worked his way to a third career hundred to keep the attack at bay till he had to leave the crease with cramps with the total at 205. There was still time available for the Indians to push for victory.

Silva and Dickwella then took over the job of steering the team towards safety. They were to survive a few trying moments especially from Jadeja (3/81), but with the Kotla pitch rolling out into a sleeping beauty, the bowlers toiled through the day for little reward.

Playing nerveless cricket, Dhananjaya first put on 112 runs for the fifth wicket with his captain and then an unbroken 58 for the sixth with Silva before stiffening muscles forced him off the ground on 119 (219b, 257m, 15x4, 1x6). By then, the faint glimmer Sri Lanka had entertained of a draw when play began this morning had turned into a bright beacon of hope.

The right-hander used his feet well to keep the spinners at bay and played smart cricket against the fast men. With no assistance forthcoming from the track, there was very little to threaten the batsmen and though Mohammad Shami and Ishant Sharma bent their backs in trying to extract some bounce, there wasn’t a lot to be had.

Alongside Chandimal (36, 90b, 121m, 2x4), Dhananjaya had scripted a remarkable rally against Australia at the Sinhalese Sports Club ground last year, helping the team recover from 25/5 to an eventual win, so he is no stranger to tough situations. Here on the day too, he was calmness personified in his over four-hour stay at the crease.

With nothing happening in terms of wickets falling — Mathews dismissed by a Jadeja ball that spun away and took the edge (and later found to be a no-ball) and Chandimal bowled by R. Ashwin — Kohli and Vijay sent down an over each for variety.