Sandeep Sharma was involved in an argument with the umpire A Nand Kishore, with KXIP skipper Glenn Maxwell also jumping in the argument. 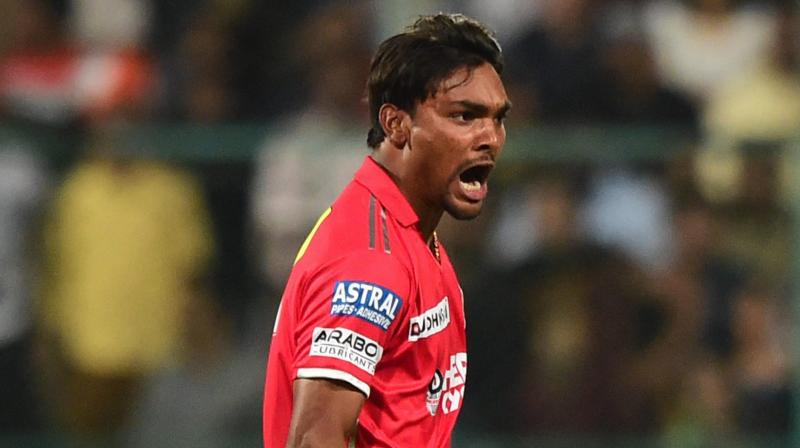 Sandeep Sharma admitted to the Level 1 offence (Article 2.1.5) of the IPL Code of Conduct for Players and Team Officials, which relates to showing dissent at an Umpire's decision during an international match. (Photo: PTI)

Mohali: Kings XI Punjab fast-bowler Sandeep Sharma has been fined 50 percent of his match fee for breaching the Indian Premier League's (IPL) Code of Conduct during his side's five-wicket loss against Gujarat Lions at the PCA Stadium last evening.

The incident took place in the fifth over of the Gujarat Lions innings when Sandeep was bowling his third over and decided to switch to round the wicket.

Subsequently, umpire A Nand Kishore called a no-ball as he thought that the bowler did not inform him of the change.

This led to a heated argument between Sandeep and the umpire, with skipper Glenn Maxwell also jumping in the argument.

At the end of the over, a visibly angry Sandeep snatched his cap from the umpire.

The 23-year-old admitted to the Level 1 offence (Article 2.1.5) of the IPL Code of Conduct for Players and Team Officials, which relates to showing dissent at an Umpire's decision during an international match.

As Sandeep has accepted the sanction levelled against him, there will be no further formal hearing.

For Level 1 breaches of the IPL Code of Conduct, the Match Referee's decision is final and binding.

While KXIP skipper Maxwell said that the no-ball incident did not affect the team much, he expressed his disappointment about how the things unfolded during the post-match interview.

"Did not really affect us so much. It was probably a crucial point of the game. It was coming towards the end of the Power Play and unfortunately the umpire forgot to tell the batsman to move to the other side," Maxwell told IPL website.