Yuvraj was confident seam-bowling all-rounder Pandya can execute the role he played eight years ago to perfection. 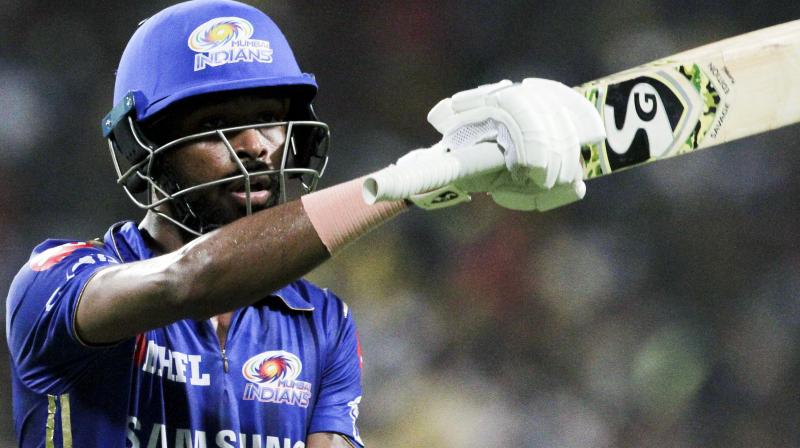 The 25-year-old has been a vital cog in Mumbai’s march to the final of the Twenty20 tournament, scoring runs at a breathtaking strike rate of almost 200 and also picking up 14 wickets with his medium pace bowling. (Photo: AP)

Mumbai: All-rounders will play a key role at the upcoming 50-overs World Cup in England and Wales and India could have one of the best in Hardik Pandya, 2011 player-of-the-tournament Yuvraj Singh has told Reuters.

Yuvraj scored 362 runs and 15 wickets as India won the World Cup for the second time in 2011 and the 37-year-old believes the rules of this year’s edition will make those players who can contribute with both bat and ball even more valuable.

A maximum of four fielders will be allowed outside the 30-yard circle between overs 10 to 40, making it difficult for captains to stack their teams with frontline batsmen and rely on part-timers to pitch in with the bowling.

“It’s a five-fielder rule and part-timers don’t get away with that kind of bowling, it’s going to be tough to bowl the sixth bowler,” Yuvraj told Reuters in an interview.

“But if you go with five (frontline) bowlers, then you know somebody has to bowl four to five overs maximum. If somebody is not bowling well, then someone has to chip in.”

Yuvraj was confident seam-bowling all-rounder Pandya can execute the role he played eight years ago to perfection when the 12th World Cup kicks off on May 30.

“I was actually having this conversation with him,” the left-handed batsman said of his Mumbai Indians teammate Pandya.

“I told him that ‘you have a great chance of performing really well with the ball and bat’, the kind of form he is in at the moment. Definitely, the way he is batting at the moment, it is phenomenal and I hope he carries that form.

“He has been bowling well in patches but as I said it is all about how you handle the pressure. I just hope that Hardik has an awesome tournament.”

After going through the most difficult period of his fledging career in the past few months, during which he had to deal with injury problems and controversy off the field, Pandya has been back to his best in the Indian Premier League.

The 25-year-old has been a vital cog in Mumbai’s march to the final of the Twenty20 tournament, scoring runs at a breathtaking strike rate of almost 200 and also picking up 14 wickets with his medium pace bowling.

In his heyday, Yuvraj was one of the cleanest strikers of the ball in the game — as England’s Stuart Broad found out when he was bludgeoned for six sixes in one over during the 2007 World Twenty20.

A veteran of three World Cups, Yuvraj is certain the wickets in England and Wales will allow a continuation of the trend towards high scoring at World Cups.

India’s wrist spin duo of Yuzvendra Chahal and Kuldeep Yadav have had lot of success in the recent past and Yuvraj implored the Virat Kohli-led side to include two spinners in their side during the quadrennial tournament.

“I feel we need to go with our strength,” Yuvraj added at an event to launch MoneyGram’s microsite through which fans would be able to send wishes to their teams for the World Cup.

“Our strength is that our spinners have been successful against South Africa, Australia and England and we should go with that. I would say go with our four best bowlers and fifth is Hardik.”

The format for the May 30-July 14 tournament has also seen a change from the previous years with all 10 teams playing each other before the top four advance to the semi-finals.

Recalling India’s exit from the 2007 World Cup in West Indies when the side departed at the group stage having lost two out of three matches, Yuvraj felt the new format would allow teams a shot at redemption.

“Playing everybody and nine games will definitely be tougher (but) it’s actually going to work in both ways,” he said.