India would be brimming with confidence after they thrashed Pakistan by 124 runs (D/L method). .at Edgbaston on Sunday. 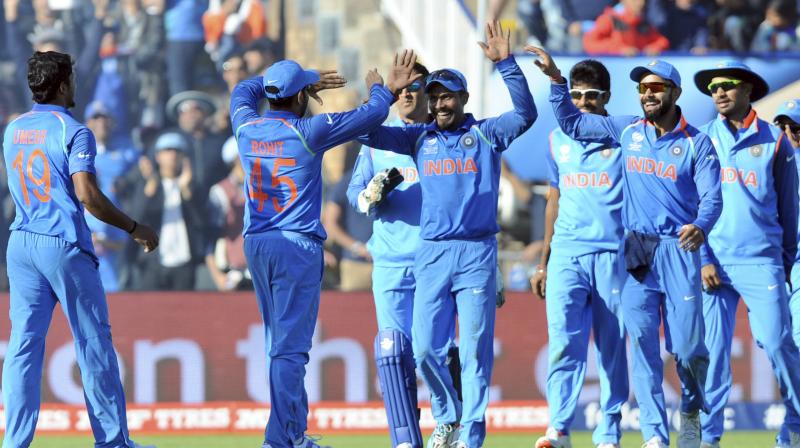 "Given the form that India is in, it is likely to emerge winner even if it plays to 70 per-cent potential. But let's just hope the players give it their all," said Harbhajan Singh. (Photo: AP)

London: Veteran off-spinner Harbhajan Singh has called on Team India, who are on a high after their thumping 124-run win over arch-rivals Pakistan in their Champions Trophy opener, to not get complacent against Sri Lanka in their Thursday's fixture.

The Men in Blue would be brimming with confidence after they thrashed Pakistan by 124 runs (D/L method) at Edgbaston on Sunday and would go into their match against Sri Lanka at the Oval to be played on Thursday as clear favourites.

On the other hand, Sri Lanka find themselves in a do-or-die situation after being thrashed by South Africa in their opening match.

"The Men in Blue should also be wary of the complacency factor. On a high after the 124-run win over Pakistan, Virat Kohli and his side must not let the intensity levels down. India just needs to get the basics right. I expect the top order as well as Kohli and Yuvraj Singh to take off from where they left in Birmingham,"Harbhajan Singh wrote in his column for the International Cricket Council (ICC).

"Given the form that India is in, it is likely to emerge winner even if it plays to 70 per-cent potential. But let's just hope the players give it their all," he added.

Stand-in skipper Upul Tharanga would not be playing against India and the veteran off-spinner feels his absence will hurt the islanders the most.

"To lose a player to suspension is a setback in itself. When the said player happens to be your captain, the team's misery only gets compounded. Upul Tharanga's two-game suspension for over-rate offences is bound to hurt the team as it prepares to take on a pumped-up India at The Oval in London on Thursday," said Harbhajan.

"The islanders do not boast a great team, and Tharanga's absence will hurt them immensely. With first-choice captain Angelo Mathews injured, it was left to Tharanga to stand in for him but now he has left a void. Let's not forget the upcoming game is extremely crucial from Sri Lanka's point of view because the team has already lost to South Africa and faces a must-win situation against the defending champion," he added.

The 36-year-old opined that if rain Gods keep away from the game and the encounters turns out to be a full 50-over game then Sri Lanka would not be able to trouble India.

"If it ends up being a 50-overs-a-side game, then I don't see Sri Lanka troubling India at all," he said.

"However, if the match is reduced to a 20-20 or a 30-overs-a-side game due to the vagaries of the weather, then the match could go either way. Needless to say, dealing with the Duckworth-Lewis-Stern method is not easy," he added.