And that was 1975’s inaugural Cricket World Cup

One Day International matches were played between the Test playing nations, prior to the 1975 WC. 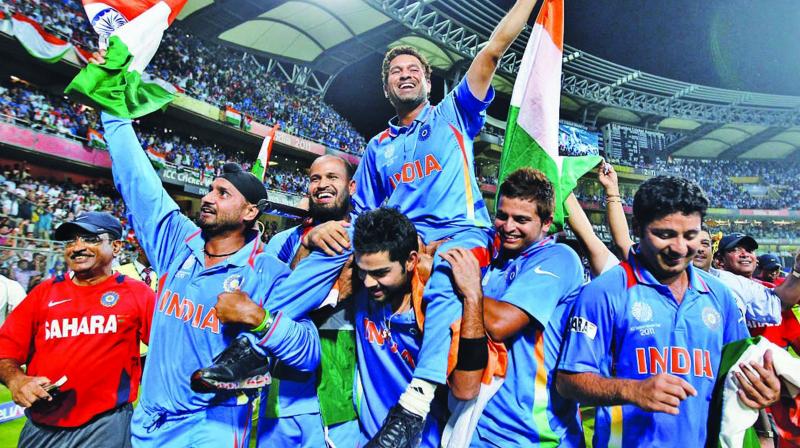 It all started 44 years ago. Imran Tahir the oldest player in this World Cup was not even born! Times were so different.

The Prudential World Cup, as the 1st World Cup was called was a 60 over a side, where cricketers in whites played with a red ball, just like Test cricket. Matches started early to fit in 120 overs being bowled a day, with a lunch, tea and innings break! Only 18 One Day International matches were played between the Test playing nations, prior to the 1975 WC. As a matter of fact, the first ever ODI was played on 5 January 1971 between Australia and England at the Melbourne Cricket Ground. It was a hurriedly organised match when ‘the first three days of the 3rd Test were washed out’. Australia won this 40 over a side, 8 ball over ODI by 5 wickets. In Australia overs used to be of 8 balls then and 8 teams — 6 ICC full members and 2 associate members — were divided into 2 groups in this fortnight long championship, which started on June 7, 1975. Group 1 had India, England, New Zealand and East Africa while Group 2 comprised West Indies, Australia, Pakistan and Sri Lanka.

No television coverage. No ball by ball radio broadcast by All India Radio. Even the newspapers next day did not carry a full report of the match, leave alone the scorecard and the result. The editions those, evidently, would be ‘put to bed’ much earlier than now! For the diehards like us, BBC ball by ball broadcast on 9, 11, 16, 19, 25, 33, 41 and 49 short wave metre bands on radio was the only source to keep abreast of the happenings of 1975 WC! John Arlott, ‘the Knight of St John’s Wood’ — Brian Johnston, Henry Blofeld, Trevor Bailey, Freddie Trueman, all legends in their lifetime, kept us engrossed with their deeply insightful, humorous account of what was happening in front of their eyes, with loads of historical anecdotes thrown in, their style of commentating was quite entertaining — to say the least! That’s not all, short wave broadcasts came with a lot of distortion — the accompanying crackle, hiss and static, with the waxing and waning sound added to the excitement. One really had to strain one’s ear and concentrate. It was such great fun. How I miss it! 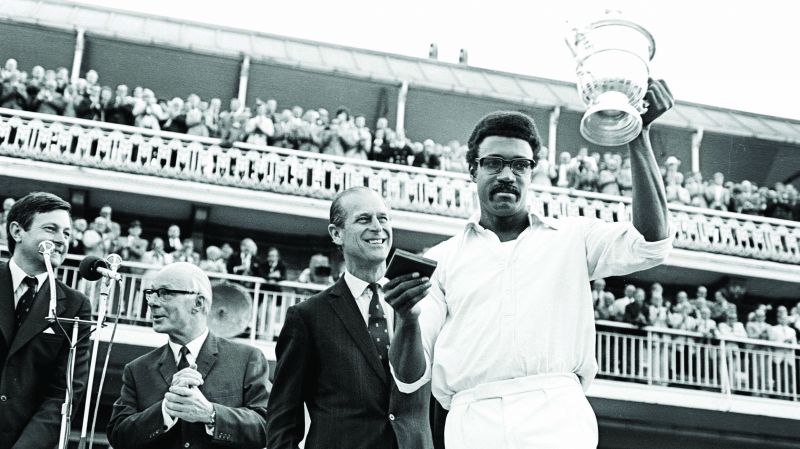 Amidst all this some of us also had the habit of keeping a record of the match, by listening to the commentary — I guess it was our way to soak up the atmosphere without physically being there.

This new concept of One Day cricket, to which we were not exposed, in India, caught our imagination because a cricket World Cup was being played the first time ever. And also, India would be playing their first ever One Day match. But, run rates, strike rates were totally alien to us! Number of balls faced by batsmen mean’t very little to us. We had this vague notion that runs had to be scored quickly, and that quickly was in terms of the time spent in the crease and not the number of balls faced i.e. if someone scored 100 runs in 100 minutes that was fast. In Test match parlance we still talk about getting a century before lunch or a century in one session, even now. Our expectations were still based on Test cricket.

India played England in the inaugural match, which will be remembered for Gavaskar’s infamous innings! Perhaps the most unusual happening in the annals of One-Day cricket! Much to our dismay he crawled to an unbeaten 36 in 174 balls and striking just one boundary. India could just muster 137 for the loss of 3 wickets, chasing an England total of 334 (for 4)! Dennis Amiss became the first player ever to score a hundred in World Cup cricket. Opening the innings, he scored 137. It was also one of the rare occasions when India went with 5 ‘fast bowlers’ — Abid Ali, Madan Lal, Karsan Ghavri, Eknath Solkar and Mohinder Amarnath — quite honestly all were trundlers, with Ghavri being the fastest. Bedi, who had some One Day experience playing for Northants, was mysteriously ignored in the 1st match. Apart from Bedi, Captain Venkataragh-avan who played for Derbyshire and Farokh Engineer were the only players who had One Day experience. Engineer who played for Lancashire was a very exciting batsmen to watch, even in Test cricket. He was the hardest hitting Indian batsman, then. Bedi went to record the most economical 60 over cricket spell against East Africa, in India’s second match, against East Africa: 12-8-6-1. This was the only match that India won, by 10 wickets. Thankfully Gavaskar showed a little more purpose, and outscored Engineer! In the third and final match, Abid Ali scored a face saving 70 to set a target of 231 for New Zealand, which New Zealand reached with ease led by Glen Turner’s unbeaten 114. 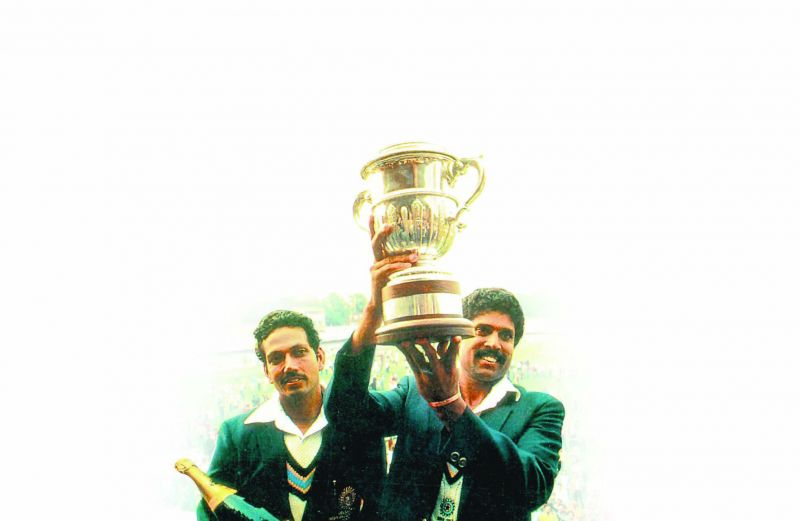 East Africa and Sri Lanka were the only two non-Test playing teams that played in 1975. Both were Associate Members of ICC. East African comprised players from Kenya, Tanzania, Uganda and Zambia, who were ‘weekend players’, mostly Gujarati expatriates from India. The English all-rounder Derek’s Pringle’s father Don Pringle played for East Africa. Don at 43 was perhaps the oldest cricketer in the 1975 WC. He tragically died in a car crash upon returning to Kenya, later in the year. Sri Lanka on the other hand had a bunch of gutsy, flamboyant cricketers risen from the ranks of schoolboy cricket. After losing tamely to West Indies, flattened by the pace of Roberts, Julien, Boyce and Holder, Sri Lanka came back with a bang against Australia. Chasing a total of 328 they started with great gusto and were merrily progressing towards the target, before the contest become bloody. Lillee and Thomson started bowling short and fast! If I remember correctly there was no restriction in the number of bouncers that could be bowled in an over, and mind you players batted without helmets. Sunil Wettimuny and Duleep Mendis were incapacitated by the ferocity and had to retire hurt! From something like almost 200 for 2 with plenty of overs to go they ended up with 276 for 4. Sri Lanka lost by 52 runs but won everyone’s heart! This bloody contest had a bearing in their last match against Pakistan, which they lost tamely.

The Pakistan team, in 1975, were as enigmatic as it is now! Even then they had great propensity to transform from the ridiculous to the sublime with great ease. Led by the wily Asif Iqbal, they had a great bunch of batsmen — Majid, Sadiq, Miandad, Mushtaq and allrounders in form like Wasim Raja and Imran Khan and of course the talented and mercurial fast bowlers Sarfaraz and Asif Masood and wicketkeeper Wasim Bari in the ranks. Most of them played county cricket and had a fairly good knowledge of One Day cricket by playing in the Sunday leagues. In their first match they lost tamely to Australia by 73 runs. Against West Indies, in the second match, batting first Pakistan scored a reasonable 266 for 7.

Chasing the target, the tournament favourites collapsed to 166 for 8, with 2 wickets in hand and 107 to win with Vanburn Holder joining Derek Murray the wicket keeper with only Andy Roberts to follow.

It was a lost cause for the West Indies. With the score at 203, Holder fell to Sarfaraz. 64 still to get. Derek Murray and Andy Roberts did the seemingly impossible. The West Indies won by a wicket. Imran did not play this match. It was Sarfaraz who caused the damage with a spell of 12-1-44-4. Pakistan then went on to clobber the badly bruised and battered Sri Lanka but could not go through to the semi-finals.

England took on Australia and batted first. A relatively unknown left arm fast bowler, playing in his first World Cup match, Gary Gilmour floored England on a bowler friendly wicket for 93. His spell read 12-6-14-6. In reply, Australia lost Alan Turner, Rick McCosker, Chappell brothers, Ross Edwards and Rod Marsh for 39. In walked Gary Gilmour to join a struggling Doug Walters. It was Gary’s day. He smashed a run a ball unbeaten 28 of the 54 required, with Walters contributing an unbeaten 21! Australia won by 4 wickets with plenty to spare.

West Indies on the other hand easily beat New Zealand, after their fast bowling quartet of Roberts, Julien, Boyce and Holder restricted New Zealand to 158 all out. Greenidge and Kallicharran ensured a comfortable 5 wicket win. Ian Chappell won the toss and asked Clive Lloyd to bat first in the first ever World Cup finals. Fredricks, Greenidge and Kallicharran were gone by 50. Lloyd came in at 5 to join a 40-year-old Rohan Babulal Kanhai, who was playing his last ever international match. They added 149 for the 4th wicket, out of which Lloyd’s contribution was 102. Such was Lloyd’s dominance that from 50 to 110, Kanhai did not add to his score. Kanhai ended his international career with a 55 and West Indies ended with a score of 291 for 8. Gary Gilmour again was the main wicket taker: 12-2-48-5.

Australia led by Ian Chappell, 60 fell short by 17 runs. West Indies the favourites were the champions and was the only undefeated team of the championship. They would soon start to dominate world cricket for more than a decade.

Unlike the current day World Cups, which are stretched to well beyond a month, the inaugural World Cup was fortnight long, as were the next two World Cups. None of teams could score at 6 runs an over, which is such a common occurrence now!

Glen Turner of New Zealand aggregated the highest runs of the tournament with 333 runs. He also scored 2 centuries and by remaining not out twice in the 4 innings he played he also recorded the highest batting average of the tournament – 166.50. Surprise, surprise, average wise Gavaskar was in second position, he aggregated 113 in 3 innings and remained not out in 2!

Gary Gilmour was the highest wicket taker with 11 wickets, which he got in just 2 matches Julien and Boyce of West followed with 10 wickets apiece, but both played 5 matches each.

Viv Richards had an inglorious beginning to his World Cup career; he could manage just 38 runs in 4 innings with a highest score of 15 not out! He was, however, more successful with the ball. He picked up three wickets.

Interestingly, New Zealand had two sets of brothers in the side, an extremely rare occurrence. The Howarth brothers: Geoff and Hedley; and the Hadlee brothers: Dayle, Richard and Barry!

The writer has been an ardent sports lover and an avid follower of cricket for over half a century. He works for an education NGO and is based in New Delhi.