After the interview got over Yuzvendra Chahal made a cheeky comment on the Twitter handle of the BCCI. 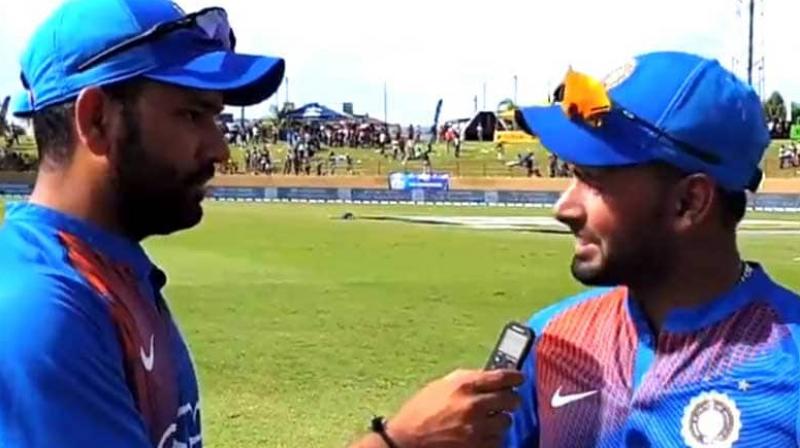 After the third T20I got over, benched player Rohit Sharma took an interview of Rishabh Pant on BCCI.TV. (Photo: video/BCCI/screengrab)

Mumbai: After ensuring a 3-0 whitewash against the West Indies in the T20Is, India will be looking to repeat the same in the ODI series too. Virat Kohli who regained his T20I form after a few cameos, struck 59 from 45 balls along with aggressor Rishabh Pant who scored 65 from 42 balls to steer India home. The duo helped India chase down a tricky target of 147 in 19.1 overs.

Rishabh Pant who was hugely criticised for throwing his wickets away in the 2019 World Cup and during the first two T20I matches, played a sensible yet fiery knock as the pair stitched 106-runs partnership.

Nevertheless, after the third T20I got over, benched player Rohit Sharma took an interview of Rishabh Pant on BCCI.TV. After the interview got over, Indian spinner Yuzvendra Chahal made a cheeky comment on the Twitter handle of the BCCI.

The BCCI uploaded the video of the interview stating, "Guyana diaries: "@ImRo45 & @RishabhPant17 unplugged. Two low scores & a match-winning fifty. The Hitman finds out how Pant turned it around in the final T20."

Two low scores & a match-winning fifty. The Hitman finds out how Pant turned it around in the final T20I - by @28anand #TeamIndia #WIvIND

Following BCCI’s tweet, Chahal who is popular for his own tv show, “Chahal TV”, stated, "Missing me @BCCI." Yuzvendra Chahal who hosts his show, interviews his teammates after every match.

Yuzvendra Chahal who was rested for the three match T20I series, missed the opportunity to host his special show "Chahal TV". However, the leg-spinner, along with Kuldeep Yadav, was selected for the three-match ODI series.

During the interview for BCCI.tv, Pant replied to Rohit that whenever he failed to score runs or his ideas didn’t work out, he did get frustrated. Rohit asked him about his feelings after finally being able to break his shackles to score a match-winning knock of 65 runs.

"Felt really good about my innings. I was not able to score runs and was getting frustrated. But I kept following my process and it fetched the desired results today," Pant said.