Avesh Khan’s opening burst where he took wickets paved the way for Wakhare to complete his demolition job. 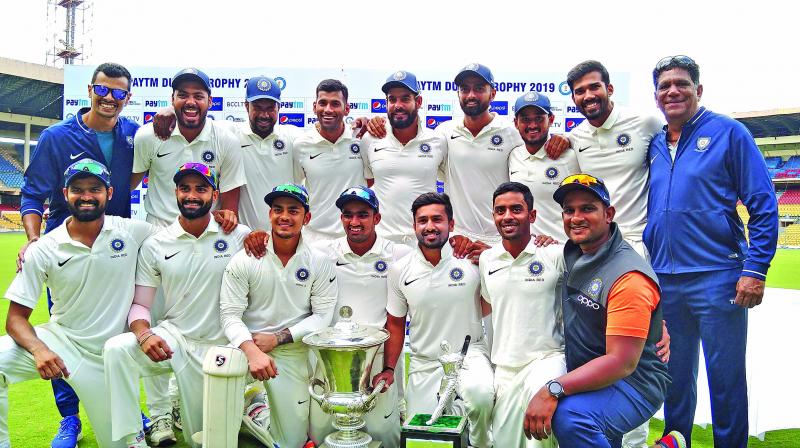 India Red celebrate after winning the Duleep Trophy in Bengaluru on Saturday.

BENGALURU: India Red clinched the Duleep Trophy with a comprehensive win over India Green in the final here on Saturday. Red won by an innings and 38 runs.

Green were bowled out for 119 in their second innings with Sidhesh Lad (42) waging the lone battle. Akshay Wakhare returned with impressive figures of 5/13 for Red.

Avesh Khan’s opening burst where he took wickets paved the way for Wakhare to complete his demolition job.

Trailing by 157 runs, Green had a tough task coming into the fourth day.

They had inauspicious start as their skipper Faiz Fazal (10 off 25balls) nicked it to ’keeper Ishan Kishan off Jaydev Unadkat. Then, Dhruv Shorey perished in the same fashion.

Akshath Reddy (33) who looked comfortable initially was undone by a peach of a delivery from Avesh.

Akshdeep soon followed Reddy to the pavilion after being dismissed LBW by Avesh. Sidhesh and Wadkar looked on course to stabilise Green’s innings, but Akshay did the trick for Red. In a span of seven overs, he cleaned up rest of the Green’s batting. Siddesh provided some resistance but he didn’t get support from the other end.