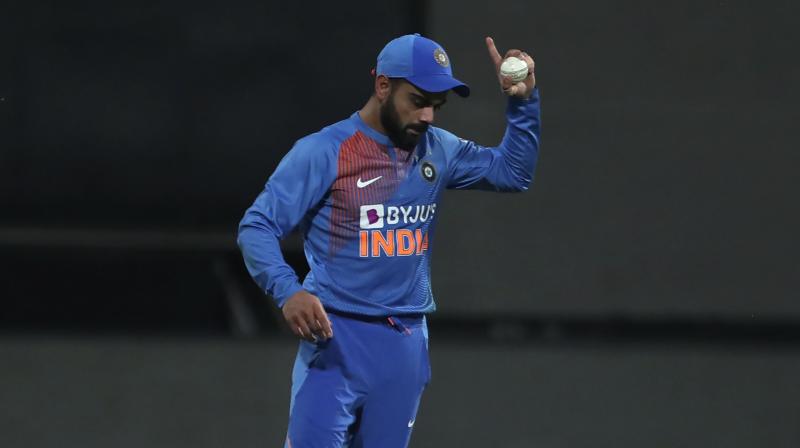 India and South Africa will next take on each other in the second Test, slated to begin from October 10. (Photo: AP)

New Delhi: Former Pakistan pacer Shoaib Akhtar has lauded India skipper Virat Kohli, saying that the 30-year-old is a 'bowler's captain' and thrives in seeing his pacers rattling the opposition.

"Virat Kohli is a bowler's caption. Kohli is not doing captaincy when he is with the bowlers, he is enjoying the bowlers rattling the opposition. It is a good thing that Indian bowlers have such a good captain," Akhtar said on his Youtube channel.

Akhtar also revealed that Shami called him up after India's World Cup semi-final loss against New Zealand. The 44-year-old pacer said that he has always believed in Shami's abilities as a reverse-swing bowler.

His remarks came after Shami's five-wicket haul against South Africa in the second innings of the first Test. India had defeated Proteas by 203 in the first Test at Vishakapatnam.

Akhtar also said that it is unfortunate that the Pakistan pacers do not rely on him for advice.

"After India's World Cup disappointment, Shami called me up and said he was feeling sad that he could not do well for India. I told him not to lose heart but to maintain his fitness. I told him that I want him to become an out and out fast bowler, he has a reverse swing, which is a luxury in the sub-continent, I told him you can become king of reverse swing," said Akhtar.

"Now, you see what he has done, he has got wickets from a flat pitch in Visakhapatnam. I am very happy for him. Sadly, our Pakistani fast bowlers do not ask me how they can improve their bowling but the Indian bowlers like Shami are doing that. It is a sad scenario as far as my country is a concern," Akhtar said.

Rohit Sharma was exceptional in the first Test as he scored 176 runs in the first innings and then he went on to score 126 in the second innings. With this, he became only the second Indian opener to score centuries in both innings of a Test match.

"Rohit Sharma is hitting hundred after hundred and I have been saying that Rohit should be in the Indian Test team. Form here, he will become a great Test player. Rohit the Test player will grow bigger. Mayank Agarwal is also in good form, Indians have a potent lineup," Akhtar said.

In the match, Ravindra became the quickest left-arm bowler to scalp 200 wickets in Tests while Ravichandran Ashwin became joint-fastest along with Sri Lanka's Muttiah Muralitharan to reach the milestone of 350 Test wickets.

With this win, India has now consolidated its position at the top of World Test Championship standings. The team now has 160 points from three matches.

India and South Africa will next take on each other in the second Test, slated to begin from October 10.