Sundar's assertion came after the second T20 International against Bangladesh, which India won by eight wickets on Thursday night. 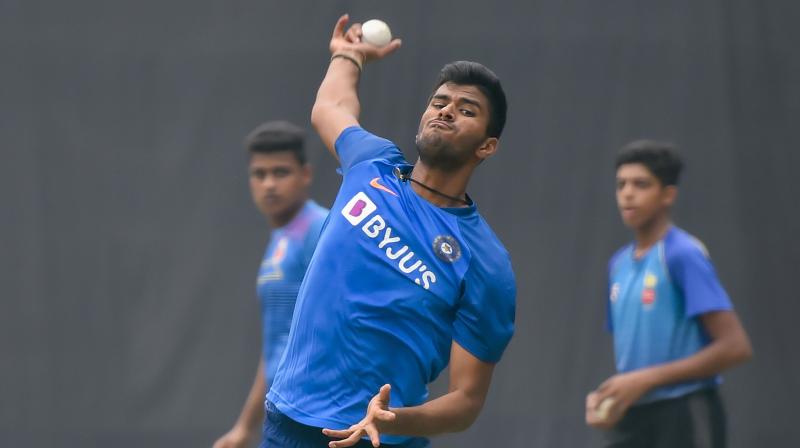 The spin duo of Yuzvendra Chahal (2/28) and Washington Sundar (1/25) played a big role in stemming the run flow after Bangladesh got off to a bright start by reaching 60 for no loss in seven overs. (Photo: PTI)

Rajkot: Indian off-spinner Washington Sundar feels tweakers have a huge role to play in T20 cricket even though they are most susceptible to being hit all over the park in the shortest format.

Sundar's assertion came after the second T20 International against Bangladesh, which India won by eight wickets here on Thursday night.

The spin duo of Yuzvendra Chahal (2/28) and Sundar (1/25) played a big role in stemming the run flow after Bangladesh got off to a bright start by reaching 60 for no loss in seven overs.

"Spinners definitely have a big role to play in the shortest format of cricket because they take the pace off the ball. Sometimes pitches can give little assistance to the spinners as well," Sundar said at the post-match press conference.

In fact, it was Chahal's double breakthrough in the 13th over that helped India restrict Bangladesh to a sub-par 153 for 6, which the hosts chased easily to level the three-match series.

"It's all about knowing what to do, knowing where the batsmen is going to hit you and other small, small things. Obviously it is important to keep things simple and be calm and composed. You can get hit badly in a few games but that happens in this format of the game," he added.

Sundar heaped praise on senior Chahal, saying the Haryana bowler is an "asset" for any team as he knows the art of picking up wickets in the middle overs of a T20 game.

"It is very important to be honest, especially for someone (like Chahal) who can bowl in the middle overs and change the dimension of the game. We have seen him (Chahal) doing that in ODIs and T20 as well. He comes in the middle overs, takes 2-3 wickets and changes the game completely," the lanky off-spinner from Tamil Nadu said.

"He (Chahal) is very experienced in this format and knows what to do to get wickets in the middle overs. We have seen him being very successful in the powerplays as well. He is definitely an asset for any team.

"The way he (Chahal) changes his pace and he knows what the batsman will try and do and which batsman is going to hit where. Different batsmen will have different plans but he is very clever. He is very calm and composed under pressure," added Sundar.

The 20-year-old, who has played 14 T20 Internationals, said Indian bowlers did a fine job in restricting the opposition to 153 on a Rajkot wicket, which offered good bounce and carry.

"To be honest the wicket was very beautiful, the bounce and carry was really good. We thought 180 was par (score), we would have liked to get that if we had batted first.

"But to have restricted them for 153, I think as a bowling unit we did a very good job," he observed.

He said, after a not-so-impressive start, the Indian bowlers pulled things back in the middle overs.

"They (Bangladesh openers) batted really well. We thought spinners will play a crucial role on this wicket. There was very good bounce and pace, and it was very important for us to take the pace off the ball," Sundar said.

Sundar is confident of India winning the three-match series at the final T20 scheduled to be played in Nagpur on Sunday.

"We have just lost one game (in Delhi) and that was also a close game. If a couple of things had gone our way in that game we would have won. But I think in this game we won convincingly. We can expect a similar track in Nagpur," he said.

Sundar also lavished praise on stand-in skipper Rohit Sharma, whose 43-ball 85 ensured an easy chase for the home team, saying the right-hander is a treat to watch when in full flow.

"I had the best seat in the house to watch him (Rohit) bat. If he plays like this then it is a treat for anyone in the stadium. Certain boundaries he hit were unbelievable," he said of his skipper.

"I also think from a bowlers' point of view. There were a few balls which Bangladesh had bowled and executed really well, but Rohit Sharma, as usual, was on-song," Sundar signed off.