Man of the series Virat Kohli plundered runs and records in all three matches. 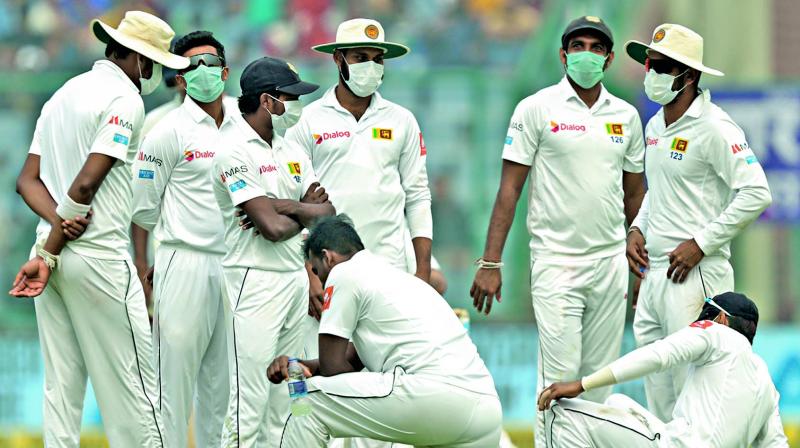 India clinched their ninth successive Test series win — equalling  Australia’s and the west indies’ all-time record — after the drawn third and final match against Sri Lanka in New Delhi on Wednesday. These are the five talking points from the three-match series.

Man of the series Virat Kohli plundered runs and records in all three matches. Nicknamed King Kohli, the prolific batsman is in the form of his life, hitting two double centuries in the series including a career-best 243 in Delhi. He became the first player to score six Test double tons as captain, surpassing West Indies great Brian Lara. Accumulating 610 runs in three matches at an average of 152.50, Kohli said “self-belief” had been key to his success. “It was a kind of a revelation that I can play in Tests the way I can do in ODIs... if you can believe in yourself, you can achieve anything in any format,” he said.

Second in Test ranking: Riding on his career-best 243 in the third Test against Sri Lanka, India captain Virat Kohli on Thursday jumped three places to grab the second position among batsmen in the ICC Test rankings. Kohli started the series in sixth position but has leapfrogged David Warner, Cheteshwar Pujara, Kane Williamson and Joe Root after the stupendous run which saw him average 152.50.

Doctors slammed cricket authorities for putting players’ health at risk, and although play was halted for about 20 minutes on day two, the game resumed. The fiasco could prove to be a death knell for Delhi as a Test venue at least during winter, when the capital’s air pollution is at its worst.

Test skipper Dinesh Chandimal rounded off his series with a century in Delhi — but immediately learned he will play no part in the one-day matches. Chandimal himself put on a brave face, saying: “I got enough matches in ODIs against Pakistan and I didn’t perform well ... This period (outside the team) I will use to become a good ODI player.” But for many others the omission simply proved he is the latest victim of whimsical changes intended to rejuvenate the team’s dipping limited-overs fortunes.

India appear well-equipped to chase a record 10th successive Test series triumph during their South Africa tour starting January — particularly given the strong form of their fast bowlers.  While spinners R. Ashwin and Ravindra Jadeja topped the bowling charts in the Sri Lanka series, pacemen Mohammed Shami and Ishant Sharma were lauded for their performances on a lifeless Delhi pitch. Earlier Bhuvneshwar Kumar claimed eight in the opener in Kolkata.

A selection drama back home even while the Delhi Test was still in progress highlighted the chaos gripping Sri Lankan cricket. The island’s sports minister stopped nine cricketers from flying out to India to take part in the upcoming one-day series — Dayasiri Jayasekera, who once called the Lankan players fat after failed fitness tests, was unhappy with the choice of the team.