Nine of the eleven are from Australia (5) and England; one makes it from South Africa 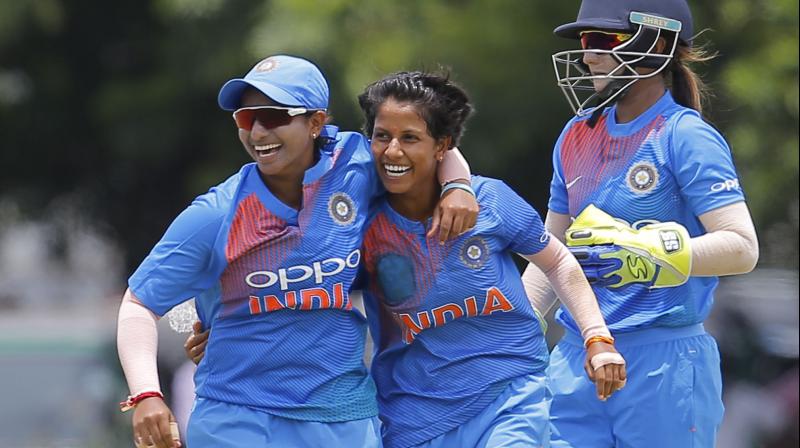 Poonam Yadav (centre) being congratulated by a teammate after taking a wicket against Sri Lanka. AP Photo

Dubai: Leg-spinner Poonam Yadav was the lone Indian to make the ICC Women's T20 playing XI of the World Cup, which featured teenage sensation Shafali Verma as the 12th player and was dominated by champions Australia.

Five players from Australia's victorious team made the side. Defending champions Australia claimed their fifth title following an 85-run triumph over first-time finalists India on Sunday in Melbourne.

The side was pulled together by a selection panel featuring commentators and former international players Ian Bishop, Anjum Chopra and Lisa Sthalekar, journalist Raf Nicholson and ICC representative Holly Colvin, the ICC said in a statement.

Poonam Yadav had Australia in knots in a dramatic opening game of the tournament. India's leading T20I wicket-taker took four for 19 in the opener and didn't look back, bagging three against Bangladesh before rounding off with wickets in each match.

Shafali Verma, on the other hand, broke record after record at the top of India's order. The 16-year-old scored 163 runs coming at a jaw-dropping strike rate of 158.25.

The middle-order batters were in inspired form throughout, Heather Knight becoming the first England cricketer to register centuries in all three formats with her ton against the debutants.

Sciver scored half-centuries in three of England's four completed matches to end her tournament with 202 runs and two wickets.

South Africa's Laura Wolvaardt only batted in two innings but certainly made her mark on the action. The 20-year-old struck 53 not out to take South Africa beyond Pakistan, with a glorious array of straight and cover drives lighting up the Sydney Showground.