Bravo thrilled that wearing 400 worked in his favour

Bravo said the No 400 jersey proved lucky for him. 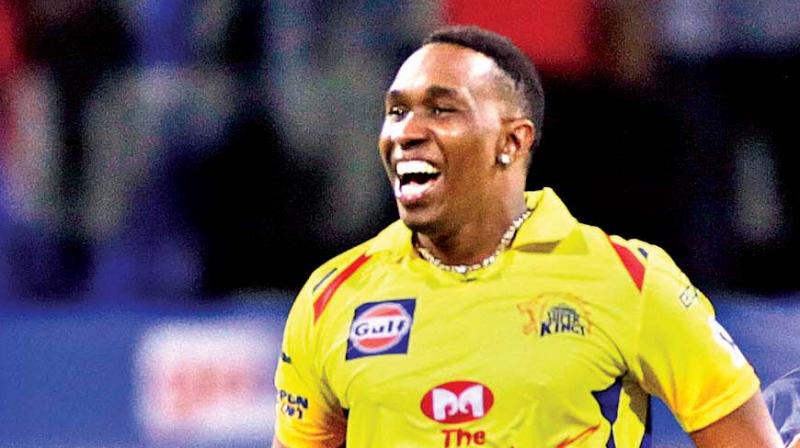 Mumbai: Champion! Champion! fame Dwayne Bravo produced a peach of an innings to announce a dream return for Chennai Super Kings with an incredible one-wicket win over defending champions Mumbai Indians at Wankhede Stadium on Saturday.

Bravo said the No 400 jersey proved lucky for him. Mumbai all-rounder and his compatriot Kieron Pollard was also wearing No 400 jersey but he didn't get to bat or ball.

“Pollard is the first player to play 400 T20 games. So he has 400 on his back. And I'm the first bowler to get 400 wickets. So the both of us said - okay, if we both play the first game in the IPL, let's do something different,” said Bravo who scored a 30-ball 68 with seven sixes and three boundaries on Saturday.

“It's a great milestone for both of us. MI and CSK allowed us to sport 400. Moving forward in the tournament, we both will go back to our respective numbers - 47 and 55. I'm happy that 400 proved lucky for me,” he said.

The 34-year-old rated the knock the best of his career. “I don't think I have ever played an innings like this in any format. So this is a special one. When I reached fifty, I didn't even raise my bat. I knew the job wasn't finished. There was still a long way to go. I was in the zone. I was just focusing to win the game for my team,” he said.

Reflecting on 18th and 19th over in which he smashed 40 runs to bring back CSK into the contest, Bravo said: “I was just trying my best to bat till the last over. I thought that if I bat deep and till the end, we had a good chance of winning. We needed 15 an over. So at some point, I had to take a chance and it worked. Anytime you hit a boundary, whether it is a six or a four, automatically the bowler is under pressure. Bumrah is one of the best bowlers in the world and iIt was just my day.”