Mahendra Singh Dhoni was Captain Uncool, but only for a while as he unleashed a barrage on his bowler Chahar. 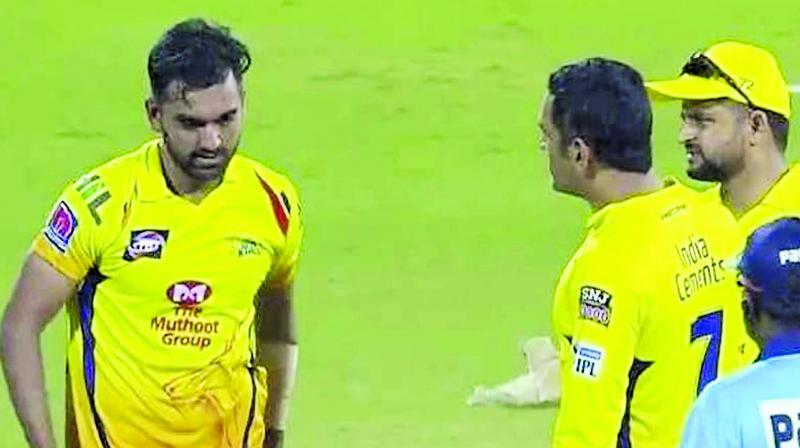 Deepak Chahar got a piece of MS Dhoni's mind when he bowled a couple of head high full tosses in the penultimate over in Chennai. (Photo: Twitter)

Even seen Captain Cool lose his cook on the field? Rarely, any fan of the former Indian captain would say. His Super Kings fans would swear by their Captain Cool even more as he has never lost his temper while handling the Chennai side in the IPl in the first eight seasons before they got banned for two seasons and Mahendra Singh Dhoni had to shift loyalty to the Pune franchise.

It was a strange sight then to see Dhoni lose his cool with his pacer and new ball bowler Deepak Chahar against the Kings XI, that too on his home ground Chepauk on Saturday. Chahar had lost it temporarily as attempted Yorkers became head high full tosses and the equation of defending 38 from 12 balls, which seemed a safe enough proposition, suddenly looked a wee bit shaky. The bowler got more than piece of the captain’s mind for his two successive indiscretions in the penultimate over of a match the home team seemed to have all sewed up.

Those who know Dhoni well also say they had never seen him lose his cool so openly on the field, He could say a harsh word or two on occasion but never would Captain Cool see red on the field. Says a friend, “He is not a man to show his emotions, not in public and not on the field anyway. Remember the emotional moment for us when CSK came back from a two-year ban to win the final last season and Dhoni was not seen jumping around. He is not the kind. In fact, he was busy playing with his daughter while his band of brothers were celebrating and whooping with delight.”

Dhoni may not have been Captain Cool for a while but he had achieved his objective of driving his team to a fourth win in five games and CSK is right there at the top of the table. A big clash is coling up against the seemingly unstoppable Andre Russell this week and fans would be certain to be watching how their Captain Cool meets that challenge.