Russell has scored 207 runs in four innings at an astonishing strike-rate of 268. His tally of 22 sixes is head and shoulders above others. 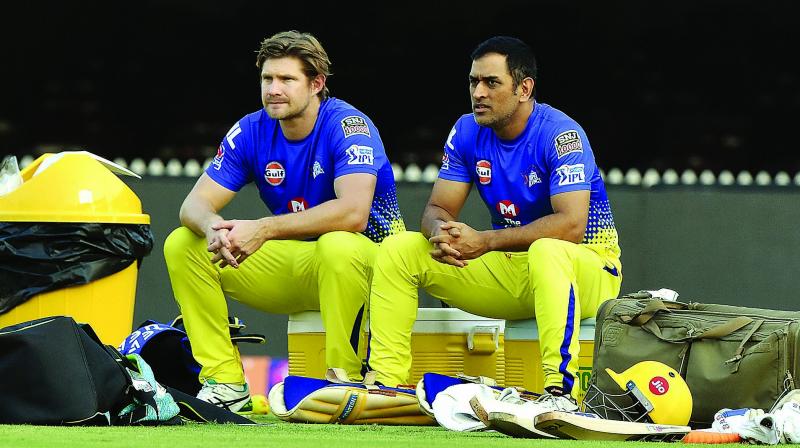 Shane Watson (left) and M.S. Dhoni during a training session in Chennai on Monday. (Photo: DC)DC

CHENNAI: It will be an intriguing battle of brains vs brawns when Chennai Super Kings take on Kolkata Knight Riders here at the M.A. Chidambaram Stadium on Tuesday. For the astute tactician M.S. Dhoni, the biggest challenge would be stopping the rampaging Knight, Andre Russell, who has already muscled his way to glory this season.

Russell has scored 207 runs in four innings at an astonishing strike-rate of 268. His tally of 22 sixes is head and shoulders above others.

Chepauk had a taste of Russell Mania last year when the Jamaican slammed an unbeaten 88 off 36 balls including 11 sixes. And it required a special, yet collective, effort from Dhoni’s men to overhaul the mammoth total (202) that KKR had posted.

Chennai coach Stephen Fleming, however, tried to downplay the Russell threat. “Possibly, there are a couple of challenges. One is you ignore the other six batsmen. And in a team that has Chris Lynn, Dinesh Karthik and Robin Uthappa you do that at your own peril. We’ve got to be careful we don’t focus overtly on Russell,” said Fleming.

“Even though he has been so dynamic, there’s still good work done by the other players. So, again, I stress it doesn’t change our preparation to focus on one or two players, but we’re acutely aware of how dangerous these players are so, it’s business as usual for us,” Fleming added.

Both Chennai and Kolkata have won four games each and are jostling for the top spot as the season inches closer to the halfway mark.

“Our balance has been affected with injury to Bravo, our options are a little bit limited,” Fleming said.

Faf du Plessis addressed CSK’s top-order concern with a half-century in the previous game here, but Shane Watson hasn’t really lived up to the expectations. Ambati Rayudu had to be dropped down the order to make way for du Plessis after a string of failures. He would be eager to make some contribution especially with the Cup team announcement round the corner.