The explosive opening batsman smashed a 121-ball 153 to help England to a tournament-high 386-6. 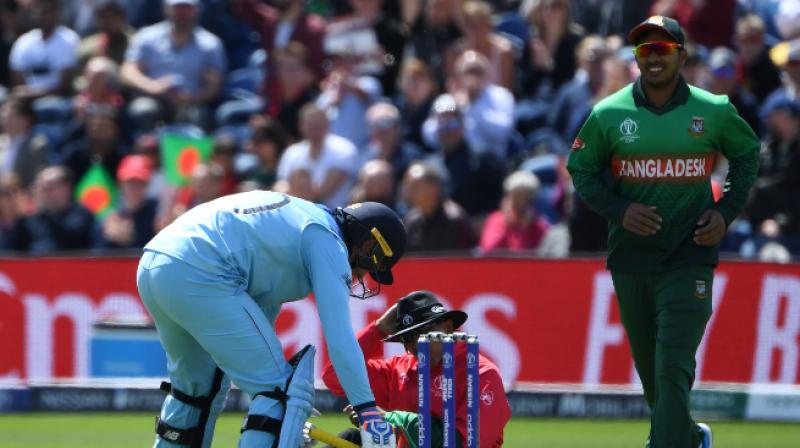 England batsman Jason Roy wasn't aware he was about to clatter into an unsuspecting umpire who also was looking out into the field. Bang! Down went West Indian official Joel Wilson, much to the shock of Roy and the initial amusement of his teammates who were laughing heartily from the balcony of the team's dressing room. (Photo:AFP)

Cardiff: His eyes fixed on the ball that was trickling toward the boundary to bring up his century, England batsman Jason Roy wasn't aware he was about to clatter into an unsuspecting umpire who also was looking out into the field. Bang! Down went West Indian official Joel Wilson, much to the shock of Roy and the initial amusement of his teammates who were laughing heartily from the balcony of the team's dressing room.

Wilson took a while to get to his feet, and even required a concussion test out in the middle. He wasn't the only one floored by Roy in a comfortable win for England at the Cricket World Cup on Saturday. The explosive opening batsman smashed a 121-ball 153 - the biggest individual score of the World Cup so far - to help England to a tournament-high 386-6, setting up a 106-run victory over Bangladesh on a blustery day in Cardiff.

Bangladesh needed a World Cup-record chase but was restricted to 280 all out in its reply, with Shakib Al Hasan's 121 in vain but it was still a joy to watch.
And so was Roy's innings. "He scores all the way round the ground, he takes really good bowlers down, and hits good balls for boundaries," England captain Eoin Morgan said about Roy. "He's great to have in the side."

It was quite the way for England to bounce back from a loss to Pakistan that had heaped some early pressure on the host nation and top-ranked team. Morgan urged his players to "stick to what we do well" and they carried out that order.

England posted its highest total at a World Cup and blasted 14 sixes, one of them from Jos Buttler (64 off 44 balls) clearing the stadium, going through the trees and landing somewhere near the River Taff running parallel to Sophia Gardens. Another from Roy, the first of three in a row, soared 97 meters over the longest boundary.

Then Jofra Archer (3-29) starred with the ball, firing down the fastest delivery of the World Cup at 95 mph (153 kph) and taking the first wicket with a ball that clipped off the bails and flew some 50 meters straight over the boundary rope.
"It was an improvement on the other day," Morgan said, "right throughout the whole game, right from the start."

This was Roy's day, though. He made the second-highest World Cup score by an England batsman, falling just short of Andrew Strauss' 158 against India in 2011, in eye-catching style. One of his 14 fours came following a misfield in the deep by Mohammad Mithun and it allowed Roy to reach three figures for the ninth time in ODIs. But as he gazed out toward the ball while jogging leisurely between the wickets, Roy slammed straight into umpire Wilson, who dropped to the ground.

A doctor came onto the field to carry out a concussion test on Wilson, who also went off the field during a drinks break for further checks. He was deemed OK to continue. Roy brought up his 150 with those three successive sixes but lost his wicket as he went for a fourth, mis-hitting Mehedi Hasan to cover.

Buttler picked up the mantle after Roy's demise, showing off his extraordinary shot-making skills that included a slapped six over long-on. By the time he holed out to Soumya Sarkar on the boundary rope, Buttler was moving gingerly after hurting his right hip while sprinting a single.

He didn't reappear for Bangladesh's innings, with Jonny Bairstow keeping wicket. Bairstow (51 off 50 balls) and Morgan (35 off 33) also had weighed in as England topped the 348-8 made by Pakistan against the English at Trent Bridge on Monday.

Bangladesh was always behind the required run rate, with Shakib - with two half-centuries already to his name this World Cup - starting watchfully before opening his shoulders. A single got him to his century, off 95 balls, as he became the second Bangladesh player to record a World Cup hundred, after Mahmudullah (twice, in 2015).

His 119-ball innings, featuring 12 fours and a six, ended when his stumps were splattered by a Ben Stokes yorker. That left the Tigers on 219-5, and with no hope with 10 overs remaining. The other batsman to impress was Mushfiqur Rahim, who made 44 as part of a 106-run partnership with Shakib for the third wicket.

Bangladesh's innings was wrapped with seven balls to spare, with Archer taking the final two wickets. "You can think of chasing something like 320, 330, if you keep wickets in hand," Shakib said. "But 380 was always against our chase or favor."

After opening with a win over South Africa, Bangladesh has lost to New Zealand and now England but gets a slight respite from its tough-looking early schedule when it plays Sri Lanka in Bristol on Tuesday.

As for the English, a third straight World Cup loss to the Tigers was avoided and they are back on track as they go for a first 50-over world title. England's next game is against West Indies on Friday in Southampton.