The news regarding AB coming out of retirement first came to South African captain, Faf du Plessis while IPL was going on. 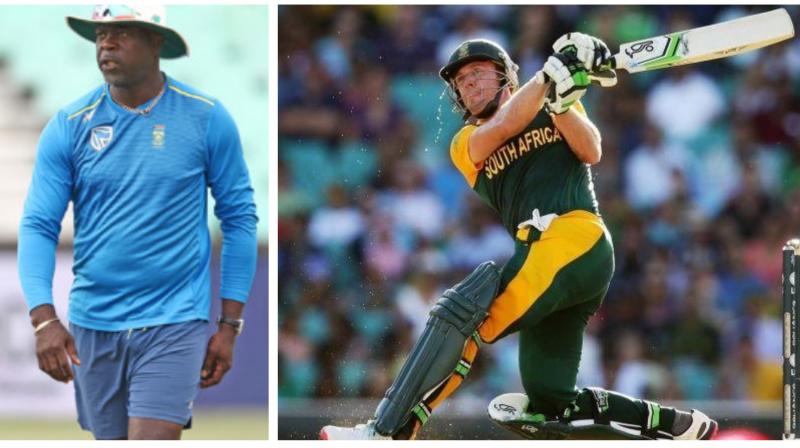 Mumbai: South Africa coach Ottis Gibson wants the Proteas to turn their attention from AB de Villiers back to the World Cup, when his team takes on West Indies. For South Africa it’s a must win match.

Addressing the press in Southampton on Saturday, Gibson revealed a lot of details on the De Villiers controversy. "Personally I suspect there are a lot of people wanting AB to be here [more] than AB himself," Gibson said. "If he wanted to be here he would be here."

During the 20-minute long press conference, the media asked him a tricky question, that is, "Are we going to talk about this all the time? Or are we going to prepare for the West Indies game?."

However, Ottis Gibson cleverly replied that while the South Africans were preparing for the World Cup in Cape Town, the players got to know that AB wanted to play in the World Cup. But, the coach told the players not to react, instead the Faf Du Plessis’ side were told to ignore the news just like any other distract.

The news regarding AB coming out of retirement first came to South African captain, Faf du Plessis while IPL was going on, and from there onwards the news started to circulate.

"He spoke to Faf, they were in the IPL or whatever, and then Faf phoned me to tell me what was going on, and then some time after that, he phoned me to ask, to say that he… I can't remember his exact words, but he said that is there any chance he could come back."

Gibson spoke to AB De Villiers just before the South African World Cup Squad was announced.  Gibson told AB that he would first have conversations with Cricket South Africa and the selectors. When AB told Gibson that he wanted to play for World Cup, the Proteas coach said his "immediate reaction" was "you've left it too late. That's what I said - you can quote me on that - that's what I said,", revealed Ottis.

Gibson said, CSA and the chief selector, Linda Zondi also shared similar views, and stated, "A lot had happened since then [de Villiers' retirement] - we'd moved on." De Villiers was also told, if he wanted to be available for the World Cup, then he would have to make himself available for the home series against Pakistan and Sri Lanka, "and he didn't."

In the middle of session a question popped up that – when he heard the news from Faf, did he and Faf had conversations regarding inclusion of AB?, to which the SA coach answered, "No. I think we decided already that he left it too late.

The door was open till December and after that to come into the piece … he knew that if he really wanted to, he knew that those ten games against Pakistan and Sri Lanka were vitally important for us, since from March to World Cup we won't have any more cricket. He knew that, and again, he has made his choice."

While revealing more about AB’s retirement news, Gibson laughed and described the news as "a court case here."

The Proteas coach and Mr 360 had conversations with each other during the day he declared his retirement in May 2018, and expressed, "I don't think you should have to beg a guy to play for his country, but I did make it clear to him that I did think he had made a bad decision, and he could help us win the World Cup, and he said he had made his decision and he wanted to have time to spend with his family and that was the end of that."

On last Thursday, ESPNcricinfo came out with reports that De Villiers wanted to come out of retirement to play the World Cup, just a day before the final squad was announced.

South Africa began the 2019 World Cup campaign with three humiliating losses in a row, and they need to win the upcoming six games to have a any chance of progressing to the semis.

Regarding the situation, Gibson stated, "I can't recall in recent history a team picking a guy that's retired. "Nobody's shaken up, nobody's died or anything. When we played in SA, we won eight of the last 10 games… you guys weren't asking those sort of questions then. You guys were focussing on the team."

Gibson said he hoped that the selected players would fully utilise the opportunity and show they belong in the world cup squad. "I would want them to flip it the other way, score runs, and show everyone that they deserve to be here.

"It's only us that can change it [South Africa's World Cup fortunes]... We can talk about AB all we want but he's not here and he cannot help us. Only we can help us. "We have to keep believing in ourselves and in the people who are here to do well in the tournament."

Gibson accepted that the team management was cautious that the ABD’s retirement news could appear during the marquee event. The authorities had directed with the unit to be focussed on improving their performance, instead of concentrating on AB’s retirement news.

"I guess guys are disappointed that it's come out at the time that it's come out," Gibson said. "When we got together in camp, we spoke about managing distractions, that was one of the things that we said could come up. "I don't imagine it is going to affect the way that we play cricket, [but] we haven't played very well so far and it is disappointing."

However,  AB’s coming out of retirement did come off as a distraction to the South African team, team management and the coach. The Proteas coach lastly added, "but to me more distracting is, you know, the level of our play. We are not playing as well as we can do.

And to me that is more important than whether AB comes back or does not come back or whether he is here or not - he is not here and the guys who are here deserve to be here. They have put a lot of work in and stuff like that, and we've moved from that as a team."