ICC CWC'19: IND vs NZ semi-final; determining the loopholes and core of the team

India are just one win away from entering the finals. On the other hand, New Zealand will look to resume their World Cup campaign on track. 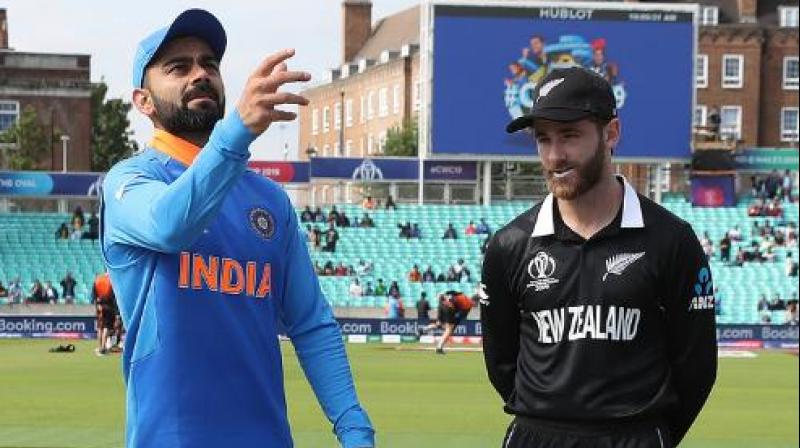 New Zealand are currently sitting at fourth, having won five out of their nine games, while losing the other three. India are currently placed at first, after winning seven games from nine matches (including one wash-out). (Photo: ICC/Twitter)

Mumbai: Rampaging India will look to book its berth for the finals after having defeated Australia, Pakistan, South Africa, West Indies, Afghanistan, Sri Lanka and Bangladesh in their group stage matches. India are just one win away from entering the finals. India are currently placed at first, after winning seven games from nine matches (including one wash-out).

On the other hand, New Zealand will look to resume their World Cup campaign on track, after suffering three humiliating defeats at the hands of Australia, England and Pakistan. New Zealand will be hoping that aggressive bowler Lockie Ferguson regains 100 per cent fitness ahead of the match as Lockie will be providing the flying start for the team.

New Zealand are currently sitting at fourth, having won five out of their nine games, while losing the other three. New Zealand who are on 11 points need to back themselves in order to win their upcoming semi-final match against India to avail any chance of lifting the coveted trophy.

Now that Dhawan has been ruled out of the 2019 World Cup, KL Rahul will be expected to anchor the innings, with Rohit Sharma acting as the aggressive opener. KL already has notched up his maiden hundred during the warm up match against Bangladesh. In the match against West Indies, KL scored 48, but he failed to convert it to a big score. However, finally in the last group stage match against Sri Lanka, KL has managed his temperament to finally notch up a hundred. And, this hundred will do a world of good for KL.

During the match against Pakistan, we saw KL Rahul and Rohit Sharma cooperation and coordinating with each other. So it seems that the duo is working on improving their communication. If we talk about the middle order, then, the middle order also has been in good touch with captain Kohli getting 82 against the Australians, 77 against the Pakistanis, 67 versus Afghanistan, and 72 against Indies.

Mahendra Singh Dhoni also showed his prime form when he slammed a hundred along with KL Rahul to guide India to their victory during their warm up match versus the Bangladeshis. However, during the match against Afghanistan, Dhoni played a slow knock of 28 which earned him heavy criticisms.

Now, the real question remains is who will bat at number four – will it be Dinesh Karthik or World Cup ousted player, Rishabh Pant?. If we talk about the lower order, then, Ravindra Jadeja and Hardik Pandya have been in good form as the duo formed a small partnership to take the Indian side towards a paltry score of 179 against the Kiwis.

Hardik Pandya again showed his brilliant batting skills as his quick cameo of 48 took the Indians to a huge score of 352 against the Aussies. Pandya again came back with a quick fire 46 to help India post a decent total of 268/7. Hardik followed that knock with a quick fire 45 versus England along with aggressive left-hander Rishabh Pant who provided a cameo of 32, only to lose the match by 31 runs.

Although, Rishabh Pant justified his place at number by playing a quick cameo of 48 to help India qualify for the semis. However, during the warm up match against the Black Caps, we saw the Indians suffered a major batting collapse majorly due to the great bowling by Kiwi pacers, Trent Boult and Matt Henry.

Coming to the bowling section, so far, the bowling department has been doing well, but the bowlers needs to up their ante as over reliance on Jasprit Bumrah could turn out to be a huge difference for the Indian side. During the match against Australia, Bhuvneshwar Kumar picked up three important wickets, barring that match Bhuvneshwar kumar has failed to pick up wickets.

Mohammed Shami played a crucial role in India’s 11 run victory over Afghanistan.  Shami picked three important wickets on the trot to become the second Indian after Chetan Sharma to pick up a hat-trick in the World Cup. In Bhuvneshwar kumar’s absence Mohammed Shami has done tremendous job as he picked three crucial wickets against the West Indies to help India thrash the Caribbeans by 125 runs.

In the match against Pakistan, Kuldeep Yadav is expected turned out to be the game changer for India as he picked up three crucial wickets. However, in the previous games only Chahal has been able to scalp wickets during crucial times, while Kuldeep has conceded runs. Kuldeep is slowly regaining his form as he picked up one wicket in the match against Windies, while Chahal picked up two.

During the match against England, India understood that it’s not advisable to play two wrist spinners after Kulcha was blasted away for 160 runs in the span of 20 overs by England’s aggressors Jason Roy and Jonny Bairstow. So, it remains to be seen if India includes Chahal or Kuldeep in their line-up. Also, Mohammed Shami will play or not depends on the pitch. But, it can be said that India will definitely include either Ravindra jadeja or Kedar Jadhav in the playing XI.

Rohit Sharma and Jasprit Bumrah have been the pillars in India's batting and bowling departments respectively. With five hundreds under his belt, Rohit is on the mood to break records and also provide the platform for Virat Kohli and his teammates to set India a huge total.

Rohit has amassed 647 runs, becoming the highest run-scorer in the 2019 World Cup, and he is hungry for more runs.

Bumrah has been India's strike bowler and the master bowler not only scalped 17 wickets but also has an impressive economy rate of 4.48.

India's middle order is yet to fire. The highly debated fourth spot is still a cause of concern as no one has really assured their place.

New Zealand will look to resume their World Cup campaign on track, after suffering humiliating defeats at the hands of Australia, Pakistan and England. England will be hoping that aggressive bowler Lockie Ferguson regains 100 per cent fitness ahead of the match as Ferguson will be providing the flying start for the team. New Zealand who are on 11 points need to back themselves in order to win their upcoming semi-final match against India to avail any chance of lifting the coveted trophy.

However, during the Pakistan match, it was seen that Jimmy Neesham, Colin De Grandhomme and Matt Henry were guilty of bowling short or wide balls more than they should have, and it allowed the Pakistani batsmen to throw their arms freely. While during the games against Pakistan and Australia, we saw that New Zealand had failed to read the pitch conditions.

One of the biggest mistakes that New Zealand is repeating is – heavily relying on Kane Williamson. The New Zealand team wins only when Williamson anchors the team when it’s in some sorts of trouble. While, when Kane Williamson doesn’t perform, the team falls immediately. During the games against Australia, and Pakistan the target set could have been chased down easily. But, the batsmen despite getting good starts had thrown their wickets away. Kane Williamson was the only batsman who was sensible enough to read the conditions and play accordingly.

New Zealand's biggest strength is their aggressive pace bowlers who are headed by Lockie Ferguson who has scalped 17 wickets in seven matches. Besides Williamson who has amassed 481 runs in seven innings, none have been in form of lately. However, during the match against England, only Tom Latham scored a sensible knock of 57 which wasn’t enough to take kiwis home. Apart from the Proteas, New Zealand also crumbles under pressure.