A tale of ‘heads and tails’

The toss has provided interesting sidelights with its own entertainment in the days when only rival captains were involved. 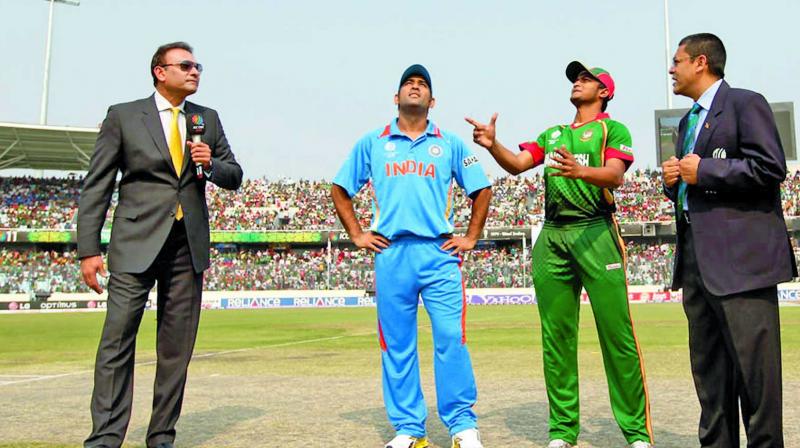 The toss was also a bone of contention in the 2006 IPL match between Kings XI Punjab and Kolkata Knight Riders.

A cricket match gets under way with the toss. It is here rival captains exchange team lists. It is pertinent to point out that in washed-out matches, the Marleybone Cricket Club ruled that the commencement of a match is the toss. Once that is over and despite a complete washout, the match will count, and for the players as well. But bizarre things have also happened at the flip of the coin.

In the recent India-Sri Lanka ODI, the toss was at the centre of controversy. As dust was settling down on the series, it came to light that there was faux pas at the toss ceremony. After presenter Murali Karthik had introduced rival captains Virat Kohli and Upul Tharanga, match referee Andy Pycroft (ex-Zimbabwe Test cricketer) asked Tharanga to flip the coin with Kohli to call.

Kohli was heard calling ‘heads’ and Pycroft on reaching the coin, said “tails India” while Karthik said, “It’s heads’ and turned to Kohli for the chat. It was an embarrassing mistake where fortunately nobody made any hue and cry.

The toss has provided interesting sidelights with its own entertainment in the days when only rival captains were involved. Lala Amarnath, the most vociferous India captain, lost nine tosses, four to Don Bradman in Australia (1947-48) and the same number to his West Indian counterpart John Goddard (1948-49) in India.

Then came Abdul Hafeez Kardar’s Pakistan team on their maiden tour to India. In the first Test at Delhi, Amarnath flipped the coin away from Kardar, quickly walked to pick up the penny and announced, “Hafeez, I have won the toss.” Only those close to former the India skipper knew the truth.

Toss fixing came to light during the sixth India Pakistan Test at Kolkata (Calcutta) in 1979-80 where opposing captains were Asif Iqbal and Gundappa Vishwanath (officiating for Sunil Gavaskar). While coin was still in the air, Asif hastened to pick it up and said, “Vishy! You have won the toss.” Reality unfolded later.

In the 1905 Ashes series, England skipper F.S. Jackson won all five tosses. When they finally met at the Scarborough Festival to signal the end of a long English cricket summer, Australia skipper Joe Darling wrapped in a towel, waited in the dressing room and received Jackson with the remark, ‘I’m not going to risk the toss this time except by wrestling’. But the spin of the coin again favoured Jackson.

It is a remarkable coincidence that both captains — Jackson and Joseph Darl-ing — shared a birthday on November 21, 1870. Sadly, they were not able to celebrate the same together.

The toss was also a bone of contention in the 2006 IPL match between Kings XI Punjab and Kolkata Knight Riders. As is customary, home captain Gautam Gambhir flipped the coin and rival skipper Murali Vijay’s call heard by match presenter Ravi Shastri as “heads” was wrong. The match referee’s efforts to set the record straight proved abortive as both captains got busy with the presenter on their tactics for the game.