The all-round performances from the Australians were superb. 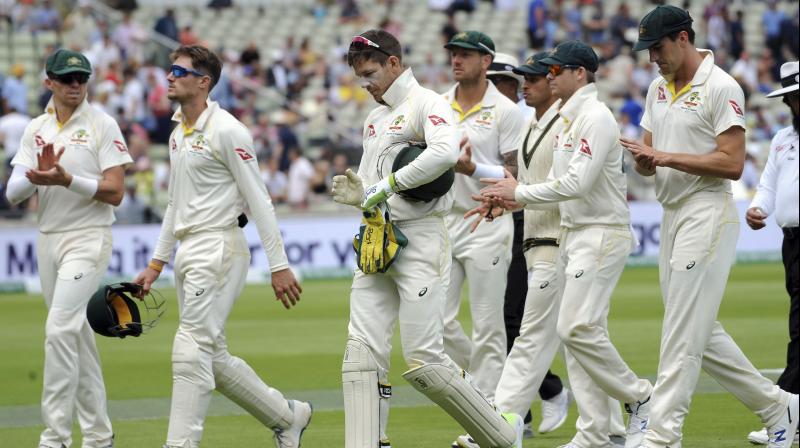 Australia retained the Ashes urn after they defeated England by a massive margin of 185-runs. (Photo:AP)

Mumbai: Australia retained the Ashes urn after they defeated England by a massive margin of 185-runs. The all-round performances from the Australians were superb.

From bowling to field, the Aussies have been absolutely brilliant. Especially, superstar batsman Steve Smith who have registered above 600 runs, including three centuries and two half-centuries. The bowlers also have been excellent.

While the batting department has been reliant on Ben Stokes who has been in phenomenal form.  Barring Stokes, Joe Root, Rory Burns, Joe Denly, Jos Buttler and Jonny Bairstow have not lived up to the expectations.

However, the England players have to blame themselves for the defeat in the fourth Ashes Test. To analyse what led England to their downfall, these factors are the main reasons why the Three Lions lost the game.

The swing king knows how to use the English condition best, and he has done it many times in the past.  The 37-year-old failed to scalp any wickets during his tenure at the Ashes.

2. Steve Smith – After serving a one-year ban for his alleged involvement, 30-year-old Smith returned to International cricket and proved his worth by scoring in the recently concluded 2019 Cricket World Cup in England, and now in the on-going  Ashes.

The right-handed southpaw has already registered above 600 runs, including three centuries and two half-centuries. The unorthodox batting style of the Australian batsman makes it even harder for the bowlers to bowl at the ‘best Test batsman’ of the current generation.

3. One Dimensional bowling attack – Unlike the Australian counter-part, the English team does have quality bench strength. The Australians have effectively used their bowlers all through-out the series. Resting one bowler at a time, the Australian team managed to see off the bowler’s workload.

4. Mark Wood – England has dearly missed the services of World Cup winning fast bowler Mark Wood, whose inclusion might have boosted the bowling line up. Wood has been an integral part of the World Cup winning squad. During the 2019 World Cup, Wood picked up 18 wickets. He missed the Ashes campaign due to side and knee injuries.

5. Exclusion of Moeen Ali – Mooen Ali, who has been a part of England’s World Cup winning squad, despite scalping three wickets in the first match, was excluded from the playing XI. The team dropped Ali, citing that he has failed to deliver an all-round performance.

England might have lost the chance to win the 2019 Ashes series, but they still have an outside chance to deny Australia from winning the series convincingly. And, their only chance to stop Australia winning the Ashes in England after 18 years, is by collectively playing well.