Off-spinner says he hasn’t done too much wrong 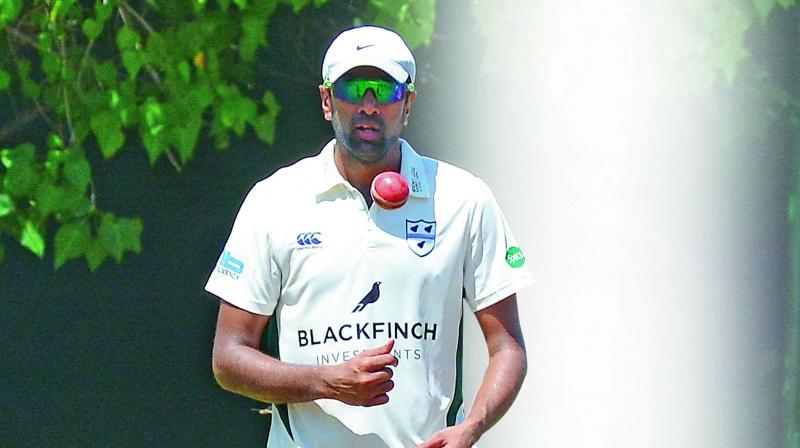 Chennai: “I am not desperate at all,” declared R. Ashwin when asked how keen he was to make a comeback to limited-overs format of the game. “This is some sort of difficult question to answer for me because I don’t know if it’s a comeback at all,” he added.
Ashwin was “rested” for the Sri Lanka ODI series in August and was not part of the Australia series either. His last ODI appearance was in the Champions Trophy final against Pakistan in June. The off-spinner is now playing for Tamil Nadu in the Ranji Trophy after he returned from his maiden county stint.  “One day, the opportunity will come knocking on my door because I haven’t done too much wrong. So when I get the opportunity, I will probably try to raise my game to the best of my ability,” Ashwin said.

Excerpts
In shorter formats, India seem to prefer wrist spinners. As a finger spinner, do you feel you are at a disadvantage? Do you feel the need to reinvent yourself or do something different?
The day I become a decision maker, I would probably be at a better position to answer that question. I am not a decision maker as of now. I never played cricket for the crowd and I enjoy cricket wherever I play. Even if I play a fifth division match tomorrow, I will enjoy it. I raise my game to the occasion and I definitely love playing the game.

Do you feel you were not given much of a role with bat in ODIs?
What’s gone is gone. I can’t really revisit it. I would have loved to bat higher up the order in ODIs and tried to do justice to my potential but it has not happened. I have got a fair amount of years left in me as a cricketer, so anything can open up.  I will never rule anything out and don’t want to take anything for granted either.

Where do you see yourself for the tough overseas series ahead, starting with the trip to South Africa?
I don’t see myself at all, to be honest. For me, it’s all about bowling well and trying to get to the top rhythm. For me, it is about constantly revisiting my best and I thought I got into some fantastic bowling and batting rhythm towards the end of the season in Worcester. I started understanding a lot more about myself -how much I need to load myself in terms of workload. I had to do everything on my own - drive down to the ground, train myself, put the cones and weights in place. I thoroughly enjoyed it.

If Hardik Pandya develops as an all-rounder, we could play two spinners in Tests abroad…

We could play two spinners, we could play one spinner and that could be a left-arm spinner - I don’t know. Honestly, I am not looking forward to anything at all. I am just taking it one day at a time and I find life to be a lot comfortable.

How important is the yo-yo fitness test?
I am a man for systems and I would strive my level best to try and match up any system that is put in place. Every leader has a vision on how to bring the team about and this is the vision of the current leadership group then it’s important to respect it. If I were the leader, then I would expect my team-mates to respect it. So, I totally buy into it. I have been in great conditioning ever since I missed the IPL. I have trained madly. You have to take the test and decide how it goes. But I am completely in compliance with it.

How did the county deal come about?
It’s my attitude that landed me there. For me, it’s all about playing cricket.  I missed playing the IPL and a fair amount of cricket owing to injuries and due to unfortunate happenings and due to the combination of the team or whatever you call it. When there was an opportunity I wanted to make myself do more than what someone else would have done.

It’s not about trying to get money out of it. I have been in touch with a few guys in England and they have been asking me randomly. One such email landed in my inbox one fine day. He didn’t even know that I wasn’t playing the ODI series and I said I was interested and if he could find a team for me. The club Worcester is one of the best clubs I went to.

On his biggest learning in England:
I learnt different ways to pick up wickets and different type  of sedentary bowlings. Maybe I will not be the type of attacking bowler when we tour abroad. I need to do a good holding role. I had to dig back into my experience in Australia when I went to Sri Lanka. I tried and repeated what was best suited for me in England.
New Road — Worcester’s home ground — is a quite a tough place to bowl at because you don’t find spin and it’s quite slow. I also learnt a lot with the Dukes ball - like how you grip it. I came back a richer cricketer, but not monetarily!