Vijay and Cheteshwar Pujara put on the highest partnership of the Test so far with 107 to help India finish on 146-1 at stumps. 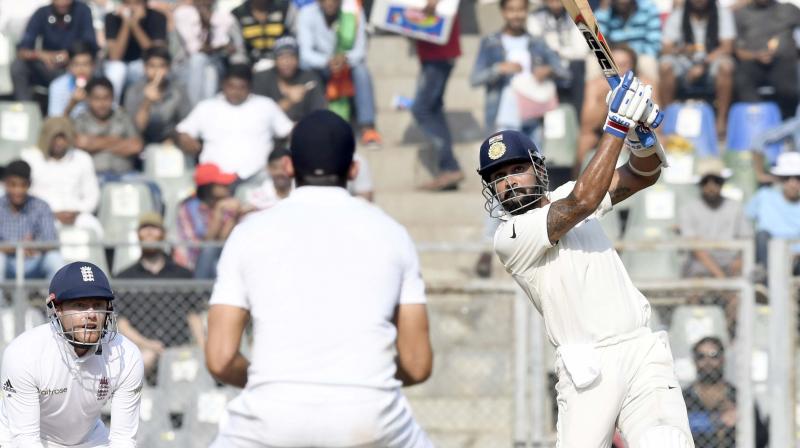 Mumbai: Murali Vijay hit an unbeaten half-century as India launched a strong reply after England posted a commanding 400 on the second day of the fourth Test on Friday.

Vijay and Cheteshwar Pujara put on the highest partnership of the Test so far with 107 to help India finish on 146-1 at stumps.

Vijay was batting on 70 while Pujara was on 47 at Mumbai's Wankhede Stadium, after Moeen Ali grabbed the wicket of Indian opener Lokesh Rahul.

The right-arm off-spinner clean-bowled Rahul for 24, giving England an early breakthrough after Jos Buttler's 76 had steered the visitors to a competitive opening total.

Buttler started the day on 18 and neatly played his way to 64 as England put on 385-8 at lunch in a Test that they must win to keep the five-Test series alive.

England began the morning session on 288-5 but Ben Stokes soon became Ravichandran Ashwin's fifth scalp of the innings when India successfully appealed a not out decision.

The left-hander was dismissed for 31 when the TV umpire ruled that the ball had nicked his bat before dropping into the hands of Virat Kohli.

Stokes looked unhappy, believing that the noise picked up by the Decision Review System's (DRS) 'Snickometer' had been that of his bat hitting the ground.

Ashwin's fellow spinner Ravindra Jadeja then grabbed the wickets of Chris Woakes (11), who was caught behind by wicketkeeper Parthiv Patel, and Adil Rashid.

Rashid made only four runs before misjudging and leaving a straight delivery from Jadeja, only for it to remove the off bail.

Ashwin took his wicket haul to six when Jake Ball was caught on 31.

Jadeja then grabbed his fourth wicket of the innings by bowling Buttler to leave England all out for 400.

Ali's wicket was an early success for England but the tourists' bowling attack couldn't find a way through Vijay and Pujara and no further wickets fell on day two.