Shastri rubs Ganguly on the wrong side, ignores him from the list of great Indian captains. 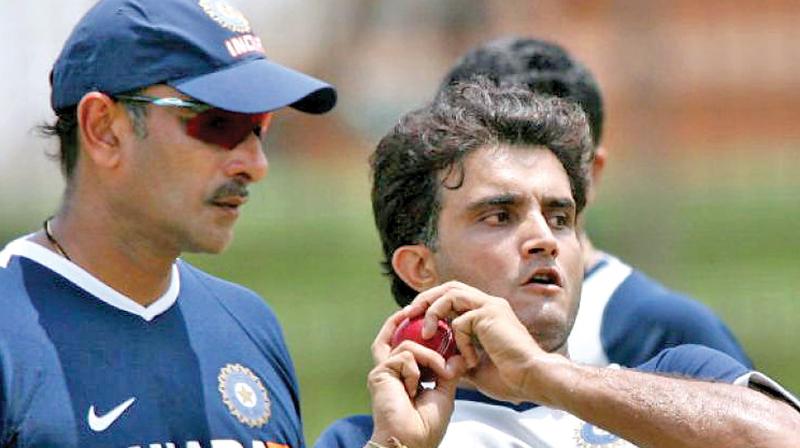 A file photo of Ravi Shastri (left) and Sourav Ganguly.

New Delhi: Former India captain and team director Ravi Shastri kicked off a storm in a teacup when he hailed Mahendra Singh Dhoni as a “dada captain” at the head of his favourites’ list that also included Mansur Ali Khan Pataudi, Ajit Wadekar and Kapil Dev, but not Sourav Ganguly.

Shastri and Ganguly have been at loggerheads since June last year after the former was overlooked in favour of Anil Kumble as head coach of Team India by an advisory committee comprising of Ganguly, Sachin Tendulkar and Venkatasai Laxman.

Shastri is believed to have blamed the Cricket Association of Bengal president for his missing out on the job.

Responded the Bengal Tiger back then, “If Ravi Shastri feels that Sourav Ganguly was responsible for him not being the India coach, he is living in a fool’s world.”

Speaking to a website soon after Dhoni stood down — or was forced to step aside depending on which side of the aisle your ears are open to — Shastri reportedly said Dhoni was India’s best captain of all time. Interestingly, Shastri didn’t mention Sunil Gavaskar’s name in his list of top Indian captains.

“He (Dhoni) is easily India’s most successful captain, by a distance. There is no one even close to him in that regard. The names that follow in that list a fair distance behind are Kapil Dev, who led India to the World Cup title in 1983 and because of whom we won the Test series in England in 1986.

“And Ajit (Wadekar) in an era before there was one-day cricket, when we won successive Test series in the West Indies and then England in 1971. And of course, Tiger (Pataudi) for flamboyance. Baaki koi nahi (there is no one else),” Shastri, who captained India in one Test match, said. Ganguly — who was nicknamed “Dada” during his time in India colours — in cold numbers emerges as India’s second most successful captain of all time behind Dhoni.