Vijay said he had his role cut out. “As I am playing one format of the game at the moment, I have got a decent idea about it and hang of it. 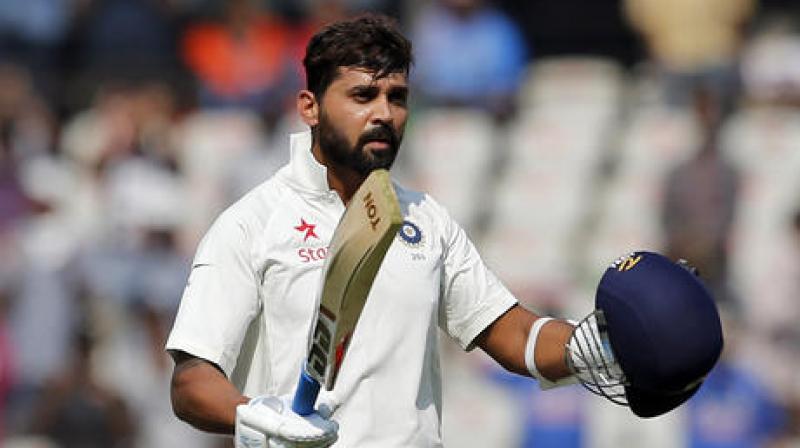 India's Murali Vijay raises his bat and helmet to celebrate scoring a century during the first day of the test match against Bangladesh in Hyderabad. (Photo: AP)

Hyderabad: Having cracked his second successive Test century in Hyderabad and being involved in a 178-run stand with Cheteshwar Pujara, following up on their 370-run partnership the last time around at this ground, opener Murali Vijay can easily count the Saurashtra batsman as his best batting pal.

“We really enjoyed each other’s company out there in the middle and he has a solid game. He makes things easy for me and we both share a good rapport and that makes it easy inside,” Vijay said of Pujara.

However, on Thursday they were lucky to avoid a runout dismissal arising out of serious misunderstanding at the wicket. “We need to work on that, if I would have been out, it would’ve been a different conversation with him,” he laughs.

Speaking about their chemistry, the 32-year-old said: “We are totally different characters in the dressing room because we don’t think the same way but once we go in the middle, we enjoy the company and enjoy each other’s success.”

“I think he’s going to become a great player. It’s a great honour to move along with him and pick his brains,” Vijay added.

Vijay said he had his role cut out. “As I am playing one format of the game at the moment, I have got a decent idea about it and hang of it. I wanted to give as many consistent starts as possible, ready for my opportunity in other two formats as well,” he said.

Speaking about the technical changes, he said: “To be honest I was feeling good about my game coming into the series. I just saw the new ball for four-five overs, read the wicket, and then thought I could play my shots and it came out my way today. Hopefully, I can carry that forward.”

Vijay was also all praise for captain Virat Kohli, who smashed an unbeaten 111. “It’s always a great sight to see Virat play. He has taken his game to a different level at the moment,” he said.

He was impressed by the acceleration towards the end of the day. “End of the day you can see we are 356 and I thought 340 would be great. The 10-20 runs extra just happened because of him... the way he was striking the ball was fantastic.

“After the new ball was taken it (the scoring) was faster I guess. And I think he has a gameplan set. Hope he can continue like this tomorrow,” Vijay said.

Asked to comment on Ajinkya Rahane taking Karun Nair’s spot despite the former scoring an unbeaten triple century in India’s previous Test against England, Vijay said: “One good thing about the team is everybody is eager to play but at the same time everyone knows what their role is.

“We respect each other’s company. Rahane is a very good Test player with an average of above 49. As I said Karun got an unbelievable knock in Chennai and is waiting in the wings. It’s good competition and a healthy competition for Team India to have.”