India thrashed Sri Lanka by 10 wickets to enter the final of T20 World Cup for the Blind. 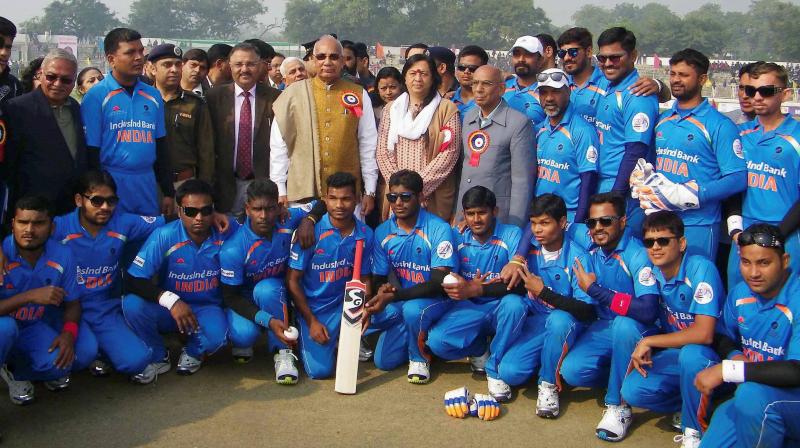 The final will be played at the M Chinnaswamy Stadium in Bengaluru on Sunday. (Photo: PTI)

Hyderabad: J Prakash's unbeaten 115 in 52balls and his unbroken opening partnership of 175 runs with Ajay Kumar Reddy (51 not out) helped defending champions India thrash Sri Lanka by 10 wickets and enter the final of T20 World Cup for the Blind at Lal Bahadur Stadium here on Friday.

Put into bat, Sri Lanka were all out for 174 in 19.2 overs in the semifinal match with the Indian bowlers and fielders coming up with an impressive performance.

Sri Lanka tried to push the scoring rate through Suranga Sampath (49 off 37 balls) and Chandana Deshapriya (42 off 35 balls) but found it hard against a strong Indian bowling unit.

Ranbir Panwar and Sunil were the home team's best bowlers, picking up two wickets each while Ajay and Golu Kumar bagging one wicket each.

India chased down the target in just 13 overs with both the openers remaining not out. The Sri Lankan bowlers found it difficult to contain the Indian openers. They gave away only nine extras but had little answer against the stroke play of Prakash and Ajay.

It was a big day, and India brought out their top game forward to make an empathetic statement ahead of the final.

They will now wait for the winner of the second semi-final between Pakistan and England at the Alur Ground in Bangalore on Saturday to know their opponents in the final.