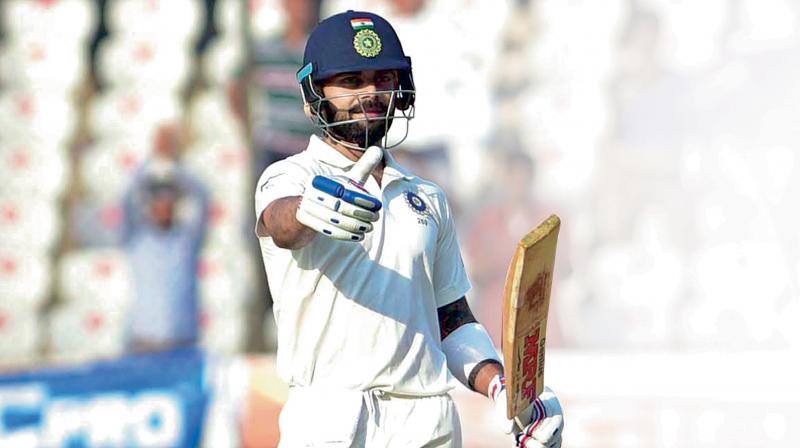 Virat Kohli celebrates his century on the first day of the Test against Bangladesh in Hyderabad. (Photo: S. Surender Reddy )

Hyderabad: Well begun is half done they say. It did not apply to Bangladesh on Thursday. The visitors struck with the fourth ball of the match and then toiled in the pre-summer sun as Virat Kohli and Co. made hay on the first day of the one-off Test here.

At stumps, the hosts had rocketed to 356/3 with the captain supremely in command with a 111 after opener Murali Vijay (108) and Cheteshwar Pujara (83) pushed Bangladesh into a corner with an outstanding partnership of 178 for the second wicket. The two were also involved in a 370-run stand for the second wicket the last time India played a Test here, against Australia in 2013.

Versatile Vijay slammed his ninth Test century and a second at the Rajiv Gandhi International Cricket Stadium while the pugnacious Pujara set another record for the most first class runs in a season as India went up, up and away from their opponents.

Kohli was all confidence right from the word go. He cut the first ball he faced from off-spinner Mehedi Hasan to the point boundary and then executed a delectable drive off pacer Taskin Ahmed through mid-off that raced to the ropes... a strong statement of things to come. Two-and-a-half hours later, a whip through the mid-wicket region off Hasan fetched his 10th boundary that brought up his 15th Test century and the unbeaten century stand for the fourth wicket with Ajinkya Rahane, who is batting on 45.

Bangladesh began well though, with speedster Taskin Ahmed providing glimpses of his ability to tear into batting line-ups by claiming K.L. Rahul in the first over as the opener failed to negotiate the pace and played the ball on to his stumps. Buoyed by the scalp, Taskin got the ball to bounce impressively off the pitch much to the discomfiture of the batsmen.

However, Vijay and Pujara kept their heads down and tackled the tough period before going about their task with application barring a momentary lapse in concentration in the 19th over when both were stuck at the striker’s end with the ball in short mid-wicket fielder Kamrul Islam’s hands. The hosts were fortunate though as bowler Hasan failed to collect the low throw and Vijay moved from 35 to 36 with a sigh. India were 67/1 then. Hasan was also a trifle unlucky with his off-spinners as a couple of edges from Vijay and Pujara flew wide off Shakib Al Hasan at first slip.

It was a different ball game after lunch as Vijay and Pujara got to their half-centuries and turned the heat on their rivals. The former lofted seasoned spinner Shakib Al Hasan for a straight six for the only maximum of the match so far.

Pujara played along and took his boundary count to nine before his edge off Hasan was pouched by wicketkeeper Mushfiqur Rahim to end his 205-minute stay at the wicket. By then, he had amassed 1,605 first class runs in 21 innings (at an astonishing average of 89.16) this season to surpass Chandu Borde’s 1,604 scored in 28 innings back in 1964-65.

Vijay coasted to his century in style, steering Kamrul Islam between point and cover to run a brace before raising his arms in triumph. The Tamil Nadu batsman soon departed though, being bowled round his legs by Taijul Islam as he attempted to sweep the left-arm spinner.