If the dislocation is confirmed, it will be the 3rd injury to the same shoulder in less than two years for Chris Lynn. 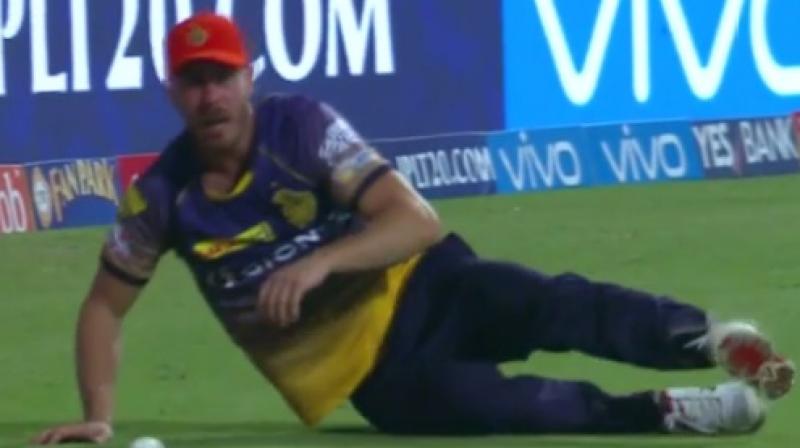 Chris Lynn sustained the injury when he dived forward in an effort to claim an outfield catch to dismiss England batsman Jos Buttler. (Photo: BCCI)

Mumbai: Australian batsman Chris Lynn's Indian Premier League (IPL) campaign appears to be in doubt after he suffered yet another shoulder injury during the Kolkata Knight Riders' four-wicket defeat to Mumbai Indians at the Wankhede Stadium here last evening.

Lynn sustained the injury when he dived forward in an effort to claim an outfield catch to dismiss England batsman Jos Buttler.

The 27-year-old immediately grabbed his shoulder on impact before being attended to by Knight Riders' physio Andrew Leipus.

He left the ground clutching his left arm close to his body and was later seen with an ice pack strapped to his shoulder.

Following the match, Lynn took to Twitter and wrote, "Dear Cricket Gods, did I do something wrong?," adding further evidence to likelihood that he has dislocated his left shoulder.

Reflecting on the same, Brisbane Heat general manager Andrew McShea said that the Big Bash League (BBL) club is seeking further information about the extent of the injury to Lynn.

"We'll stay in close contact through this initial process as we get an idea of what the extent of the injury is and what the options are for him. It's unfortunate for Chris to sustain another injury to the shoulder that has troubled him in the past. It's not the sort of birthday you would wish for, and the best wishes of the club and our fans go out to him." ESPNcricinfo quoted McShea as saying.

If the dislocation is confirmed, it will be the third injury to the same shoulder in less than two years for the Queenslander.

The Australian batsman made an impressive start to his IPL campaign, scoring an innings of 93 not out against Gujarat Lions which was followed by a rapid 32 when Knight Riders batted first against Mumbai Indians.

Earlier, Lynn had missed the first half of the 2016-17 season after dislocating the same shoulder in Sri Lanka last year, while his BBL campaign was also cut short due to a neck problem. He was also forced to miss the 2015 Matador BBQs One-Day Cup owing to dislocation of his left shoulder.